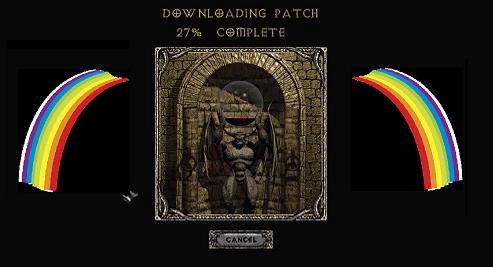 Earlier this year, we brought you the news that Blizzard was asking the community for what they wanted in the next patch for venerable action RPG Diablo II.  Besides the obvious desire for rainbows and glitter, a few more serious requests were made, namely, the ability to respec.  Thankfully, hundreds of other Diablo II fans had similar requests, and a respec has been added to the game, at long last!

Other cool features of the patch, version 1.13, include different display tweaks allowing the game to look a bit nicer on modern widescreen monitors.  Rounding out the patch are the expected bug fixes and a sizable amount of class and skill balance changes.  Kudos to Blizzard for their longtime support for Diablo II, but we're totally ready for the sequel!

A new Mystery has been revealed!

- Players of Hell Difficulty Realm games are hereby warned once again,
that a series of new and challenging tests await you! The answer lies
within Diablo's Bosses, which span across the world from the Den of Evil
to the Throne of Destruction...

- Respecialization is now possible! Completing the 'Den of Evil' quest will now additionally reward 1 free respec which can be saved. Players who have already completed this quest should receive 1 free respec in Hell difficulty.
- Increased the drop rate of high runes.
- Support for blit scaling in windowed mode. The game can now be maximized to the largest 4:3 resolution supported (hooray widescreen users).
- Some rare drop items now have an orange color. i.e. Runes and items required for Uber Tristam.
- Modified the gold bank limit to be a flat cap not bound by level.
- Nightmare/Hell WilloWisps champions/uniques have had their damage greatly reduced.
- Removed the requirements to create a hardcore character.
- Greatly reduced the explosion damage dealt by Fire Enchanted monsters.
- Uber Mephisto and Uber Baal's summoned minions no longer give experience.
- Removed Oblivion Knight's Iron Maiden curse.
- Hellfire Torch Firestorm proc rate has been reduced to 5%.
- Users can now toggle the display of text over the Health and Mana globes by clicking on the bottom area of each orb.
- Updated two Act 5 mercenary names to Klar and Tryneus.
- When creating a single player game, pressing the 'Enter' key now automatically creates a Hell difficulty game if possible.
- When creating a game, each difficulty button is now bound to a unique key: Normal 'R', Nightmare 'N', and Hell 'H'.
- The 'Enter Chat' Button in the battle.net waiting room is now bound to the 'Enter' key.
- Added the windows system buttons to the game window (MIN, MAX, CLOSE).
- Added new command line parameter '-nofixaspect' which allows users to not fix the aspect ratio to 4:3 when maximizing windowed mode. This lets the game 'stretch' to fill your monitor.
- Added support for '-sndbkg' command line switch. This enables sound in background.
- Added support for '-nosound', '-window', and '-windowed' command line options.

-Blessed Hammer - No longer ignores resistances of undead and demons.

-Werebear - Damage bonus increased by 15% across all ranks.
-Werebear - Increased health by 25% and armor by 1% per point.
-Shockwave - Synergy from Maul adds 5% damage per point.