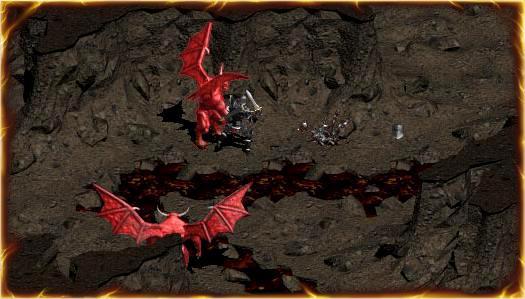 In many ways, co-op gaming is going through a sort of renaissance. The past few years have been a rebirth for co-op and 2007/2008 could be considered “Co-Op Year.” With most systems having several AAA titles featuring co-op (including Halo 3, Resistance 2, etc.). However, many would say that this renaissance of co-op gaming could not have happened without online co-op. This is because the rebirth of co-op seems to have coincided with the rise of online co-op.

However, online co-op is a very new feature in the world of gaming, since the trend didn’t really gain much steam until the early 2000s.  While games like DOOM offered LAN and Modem play, it wasn't truly an online architecture.  It took just as long to set up a game as it did to play it.  It wasn't until 2000, when a game called  Diablo II was released that things changed.  This could be seen as the game that launched online co-op into popularity. While some games did online co-op before Diablo II, no major game had done it as well as Diablo II. Over Blizzard’s Battle.Net system, you and up to seven buddies could play the classic game together, making the more difficult sections of the game more manageable. The feature was a big hit, and people still play the game to this day. The ability to play with people who were miles away was truly great, particularly with such a fun game like Diablo II.

The online co-op revolution was started by Diablo II, but the current generation of consoles gave it power. This is also partly due to faster connection speed and the advent of DSL and Cable internet. There is a good reason why services like Xbox Live require you to have a broadband connection to play online. It is sort of amazing, because time-wise online co-op started up extremely fast, became popular fast, and is quickly becoming a standard feature in many genres, particularly First Person Shooters. So, knowing the brief history of online co-op, you might be asking yourself: “what is so great about it?” Well, as someone who has few gamer friends (and the rest living across the country) online co-op comes in pretty handy. Online co-op is also convenient, since you don’t have to find three friends nearby. You just hop online and find some buddies. Furthermore, online co-op has helped put an end to the woe of being the only guy on the block with a game and only one controller. Or maybe that’s just me. It is true that if you don’t play with buddies online, you do lose a decent amount of the experience, but at the same time, the sheer convenience is nice. Online co-op enables the team at Co-Optimus to gather together, as if we were in the same room, and that’s pretty darn cool.

Online co-op is particularly good when it is mixed with fun gameplay. That is to say, any regular shooter plus online co-op isn’t so amazing. It has to have spice. Left 4 Dead is my shining example of this, since it takes a great game to play at home, brings it online, and retains pretty much all its scariness while you fight alongside people from around the globe. Crackdown also does this well, enabling you and a teammate from some corner of the world to team up as super cops.

Truly, online co-op is a wonderful feature, something that gaming fans have been clamoring for decades. The fact that it is becoming a standard is great, since it really is a force that is bringing gamers together. And considering our site is all about playing together, I think that I can safely say that online co-op rocks!