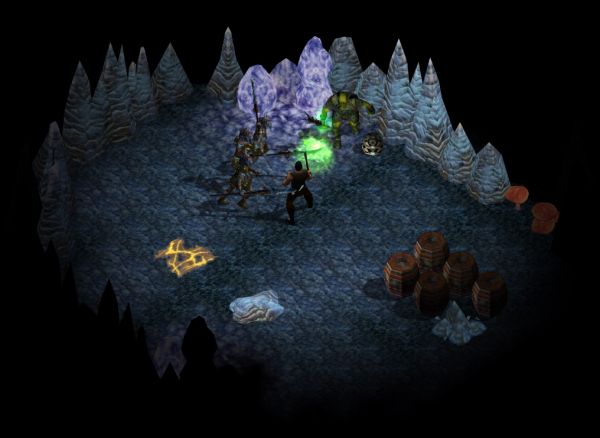 The action-RPG has been experiencing a resurgence of late, as evidenced by the well-reviewed Torchlight.  Another example of the genre is being developed by indie studio Soldak Entertainment.  Din's Curse will follow the Diablo 2 formula for gameplay, but there are some nice innovations that make it stand out from the crowd.

There are six character classes in the game, and each has access to three types of skills.  For example, the Wizard class can use spells from Ice, Fire, and Magician lines.  This is standard, but what makes it unique is the ability to choose a hybrid class, selecting any two skills types across classes.  You could play a Weaponmaster (Warrior skill)/Magician hybrid, for instance.  According to the Din's Curse website, there are 141 combinations!

The storyline seems interesting as well.  According to an interview with developer Steven Peeler, no two games will play the same, with unique quests and plot developments all based on your character's actions.

The dynamic world is definitely one of the main features and many of the other big features like the randomness and choices works hand and hand with the dynamic world. You will never play the same game twice. Not only will each game start differently but even if they some how managed to start the same they would quickly diverge. This is caused by your actions, your inactions, NPCs’ actions, and even monsters’ actions. What you do and what you don’t do is very important. Let me give you a good example to illustrate how this works.

You just found out that there is an uprising of Nagas in the dungeon, but you’re currently busy with something else. Soon they find a leader named Salir. You don’t care about some Naga named Salir. However, Salir sends some raiders to town and they take Kata hostage and a ransom is being asked for. Can you rescue the Kata? Should you just pay the ransom? If you refuse the ransom, can you rescue her in time? She will die if you cannot save her. Let’s say that you refuse the ransom and Salir manages to kill Kata. What if that was the town’s apothecary? I hope the original reason why you were too busy to deal with the uprising was not finding supplies for the apothecary to use to cure a plague. That would be a bit difficult now.

All in all, Din's Curse looks promising.  We'll definitely keep you posted on any updates, and recommend you check out the game's website at the link below.