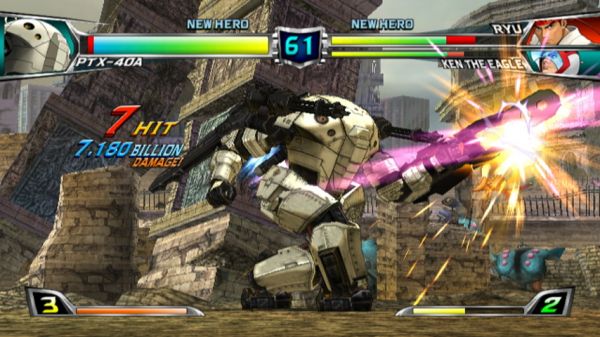 Capcom will be releasing a definitive version of the otherwise Japanese exclusive Tatsunoko Vs Capcom: Cross-Generation of Heroes to the rest of us. Only this one will blend several types of Capcoms various shooters with Capcom vs. Tatsunoko charm in one beautiful package. The original Capcom team have worked hard on making quirky mini games and added it to the Capcom vs. Tatsunoko: Ultimate All-Stars for release.

"It has four unique playable characters: Ryu and the PTX-40A from the Capcom side, and Ken the Eagle and Tekkaman from the Tatsunoko side. All of the characters move in their own way, and have character-specific regular and special attacks (shinku-hadoken anyone?). It has mini-bosses, bosses, and MEGA bosses, different paths to take through the game, and you can play up to 4-player co-op!"

The really unique thing about this game is that the Capcom and Tatsunoko characters are joining forces against another Capcom franchise.  The entire game takes place in the Lost Planet universe with these characters battling the Akrid.  That's right, it's the dreaded triple cross game promotion.