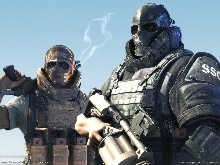 What really differentiates Army of Two’s co-op style of teamplay are the unique moves never seen in a game before. One of the best was what I like to call “the man train,” where one player grabs a portable shield (a car door can suffice) and crouches, holding it up in front of his face, while the other player gets behind him and can shoot out from behind, either blind firing or by popping up and aiming. The best thing about it is to initiate it, all you have to do is run up behind your buddy and you’ll be locked together—no A Button pushing necessary. The guy with the shield is “driving” and the guy in the back is like a walking turret.

Army of Two is set to come out on March 4th on both the Xbox 360 and Playstation 3.  The game has been designed from the ground up to be a cooperative experience.