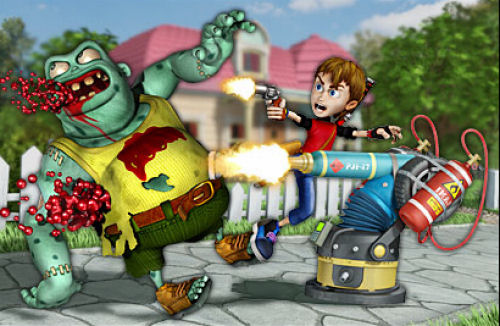 It's always interesting to see some unique form of cooperative play pop up, such as that which is coming in TweetDefense.  The iPhone and iPod Touch game mashes up zombie survival modes with the tower defense genre and throws in Twitter for good measure.  Twitter?  Yes THAT Twitter.

Your power in the game is derived from your social networking numbers on Twitter; things like followers, tweets, and more.  Using a secret mathematical formula the game will boost the power of your towers in the game to fight off one of the six different zombie types across ten levels.  So the more friends you can acquire and cooperate with - the better your chances are for survival.

The game is being produced by Promethium Marketing, which was founded by veterans of Microsoft's Gamerscore Blog.  Being that there's a bit of a silly PR spin on the story.

“A lethal marketing virus has turned half the world's population into brain eating zombies. Now they are after you and your friends' brains! All you have on hand are every day items and an Internet connection. Reach out to your twitter friends to help you build defense towers out of every day items. Stop the zombies from penetrating your home base and eating your grey matter! With your friends helping you design the towers and your brilliant battle strategies the zombies don't stand a chance … or do they?”

The game should be out soon for a limited time sale price of $0.99.  Now's a good time to follow cooptimus on twitter - I hear we make you really awesome in the game.*

*ok not really, but you should follow us anyway.