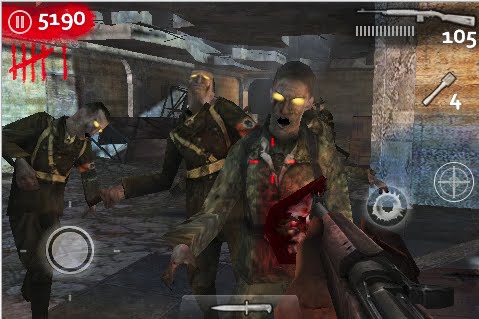 What could possibly be better than portable zombie slaying co-op?  How about portable zombie salying co-op for the low, low price of $0.00?  Call of Duty: World At War: Zombies (now with twice the colons), one of the most popular apps for the iPhone, now has a free version.  Imaginatively dubbed "Zombies Lite", the free game allows zombie hunters to try before they buy.  However, the fun isn't unlimited: three rounds of single player and two of co-op multiplayer are offered.  By then, of course, I'm sure you'll be willing to pop the $10 for the full version.  I can't wait to put this on my brother's iPhone when he isn't looking; he's enamored of the Swine Flu Scanner and Fart apps right now...

One of the Top-Selling Apps of 2009 Available for

Santa Monica, CA – January 25, 2010 – Zombies have overrun App Store as Activision Publishing, Inc. and developer Treyarch have launched a free version of Call of Duty: World at War: ZOMBIES. The Call of Duty: World at War: ZOMBIES Lite App allows iPhone and iPod touch players to experience three rounds of the “Nacht der Untoten” (Night of the Undead) map in single player, explore the map and access a multitude of weapons from the Mystery Box. Multiplayer fans will be able to play for two rounds via Wi-Fi, locally or across the Internet with four players or two players over Bluetooth.

The Call of Duty: World at War: ZOMBIES Lite App is available from the App Store on iPhone and iPod touch.

Named as one of iTunes Rewind’s Best Apps of 2009, Call of Duty: World at War: ZOMBIES faithfully delivers upon the experience of one of the most popular and played online games of 2009 and offers limitless rounds both single player and the game’s highly-addictive co-op gameplay experience in full 3-D, allowing up to four players to join a game via Wi-Fi, locally or across the Internet, and up to two players via Bluetooth. The Call of Duty: World at War: ZOMBIES App, developed by Ideaworks Game Studio for the iPhone and iPod Touch based on Treyarch’s console version, is available for $9.99 from the App Store at www.itunes.com/appstore/.

For more information about Call of Duty: World at War, visit www.CoDWaW.com