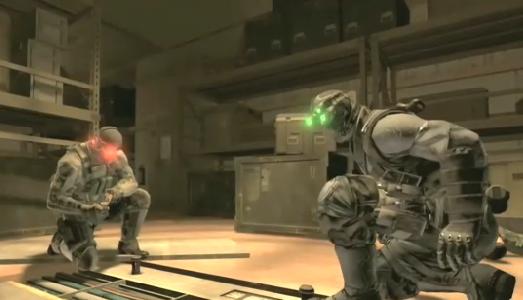 The most obvious question was - why the delay?  According to Redding, the team really wanted to add that final coat of polish on the game.

"A late game can eventually be good, but a bad game will always be bad..."

Other details include the game's length, which when factoring in the single player and co-op campaign should be between 12 and 16 hours.  On top of that there's the four player co-op Deniable Ops mode which should have some significant replay value, at least, that's what Redding hopes.

While the game is open to any type of game play, whether you want to try a more action oriented approach with guns blazing, or as Redding put it, "a hardcore stealth way."

Conviction will have a nice variety of security ingredients for players to deal with... some of which you might find it handy to have a hapless guard in chokehold...

All we're doing is giving players some tools for getting themselves out of trouble if the *** hits the fan...

Finally one interesting tid bit for those of you who played Assassin's Creed 2.  You may have noticed a new feature in the game called UPlay, which was basically an achievement system tied to Ubisoft games.  The points earned in that could be used to download content and other features, and according to the interview, these points are usable across games.  That means points earned in AC2 can be used to redeem content in Splinter Cell Conviction.  Nice!