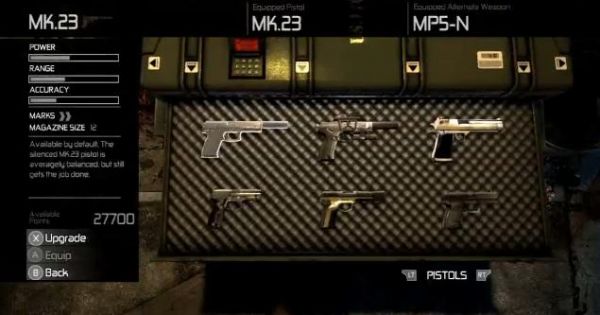 GameTrailers posted a nice, long video interview last weekend with Splinter Cell: Conviction creative director Maxime Beland, who was quite eager to blast through a lot of the new features that would be delighting fans next month.

Among them was the Persistence Elite Creation System (PEC), which is basically the Rainbow Six Vegas customization options in a nutshell. It was also included in H.A.W.X., and will appear again in Conviction. Cases like the one pictured above will be a regular sight, serving as a customization menu for you to tinker with your toys.

It's super simple: you have some objectives you need to complete, and once you've got that, you get some points that you can spend to update your weapons, your gadgets, and to also unlock different armors and suits, and that's something that's persistent between single player and co-op.

To me, customization is a huge aspect of co-op games. I've spent hours unlocking camouflage patterns in the Rainbow Six Vegas games, and I can recall a great fondness for being able to view other players' decked-out characters in Syphon Filter: The Omega Strain before that. Being able to unlock, upgrade, and show off guns and outfits is a large part of what makes games like Army of Two: The 40th Day appealing to me, and I can see this paying off for Splinter Cell in a big way.

Actually, if you played Assassin's Creed II and you've got some Uplay points that you're saving up, you can spend them in Conviction. I think my favorite thing that you can redeem is a game mode - Infiltration game mode.

So for anyone concerned about being locked out of Infiltration mode if you don't pre-order the game...here's an alternate method worth trying.

All in all, it certainly feels like Ubisoft is really going to come through for co-op fans, finally. I've played the demo, I've seen the list of confirmed weapons, and I'm more than ready to get my copy in the mail in April.

Check out the full video below:

Thanks to Mrxknown_JG for the tip!