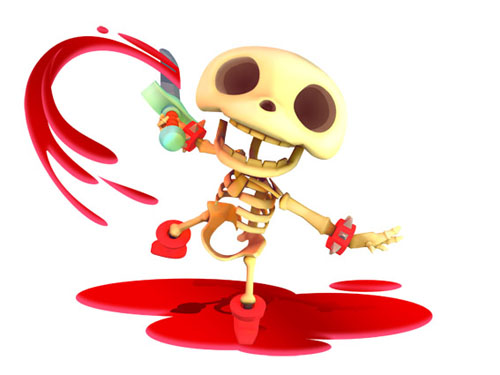 Fairytale Fights gets its first DLC on PSN tomorrow, February 11th. The game, as you might recall, is a brutal hack-n-slash featuring all of the fairytale icons of your childhood dismembering each other in extremely bloody ways.

So what will this DLC net Fairytale Fights fans? Entitled Treasure Pack 1, the DLC features new characters, which you can play in story mode, and PVP arenas. The new characters are Bones, Princess Afia, Puss in Boots, and Grandma Red (Little Red Riding Hood's grandmother).

As for the three PVP arenas, Playlogic's Online Marketing Manager, Debbie Brettell, gives a brief outline of the different challenges players will face on each map:

Time to Die - In Time to Die, players have to traverse the tricky elevators on both sides of the room. The battlefield is small, the action is dense! Get to the weapons, risk your own life and slaughter your enemy. Your opponent is just waiting for you to make a mistake!

Rooftop Rumble – On top of the snow covered rooftops you must fight! Use the bridge to throw your opponent into the thorns, crush them against the wall or simply use it as access to the floors below. Trick your enemy into a false sense of security and when the time is right, fire your arrow (triggering the bridge), giving your careless opponent a nice surprise! A bloody surprise!

Cannon Ball Bay – Cannon Ball Bay is made up from 5 islands, and a Pirate ship. Fighting on islands means a lot of pushing and trying to shoot each other into the water, however when you take control over the cannon the fighting changes to a cat and mouse game. Take your 3 chances to shoot at your enemy whilst they cower and hide – this will be carnage!

Treasure Pack 1 will be available for the Xbox 360 at a later date. For more information about Fairytale Fights or Treasure Pack 1, check out their website to sign up for the newsletter.

Also of note, Fairytale Fights is now $19.99 on Amazon.com. Both the Xbox 360 and PlayStation 3 versions are on sale.