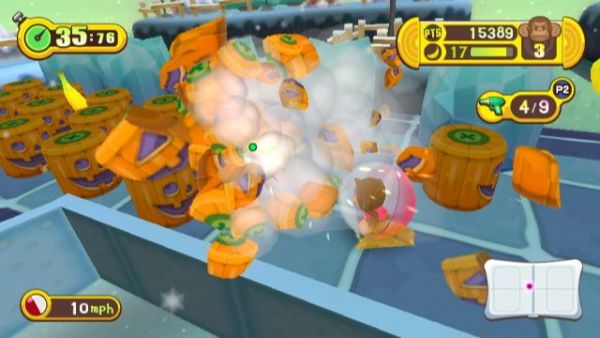 Super Monkey Ball and the first sequel were among my favorite games for the Gamecube.  My family and I spent hours and hours getting those adorable little monkeys where they needed to be.  The minigames, too, were a whole heap of fun.  The Wii's Super Monkey Ball Banana Blitz just didn't have the same charm, for some reason.  The newest game in the series, Super Monkey Ball Step & Roll, adds in co-op, which is certainly a step in the right direction.

What form of co-op, you ask?  Well, it appears that co-op takes the form of Super Mario Galaxy, where one player has all the fun, and the other player uses the Wii remote to shoot enemies.  A more robust experience would be preferable, but when it comes to co-op, we'll take what we can get.  Especially when adorable monkeys in hamster balls are involved.