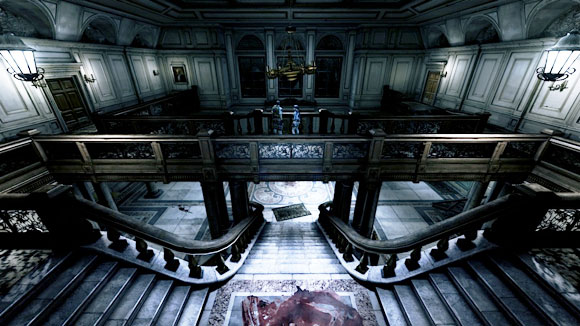 If you downloaded the first piece of the Resident Evil 5 content called "Lost in Nightmares" you're getting more than just 2 player co-op play and new outfits for your characters, it contains the classic Resident Evil camera found in the earlier games of the series.

That's right, soon you can be frustrated like the days of old as you fight the controls and obstructions to gain a view of your character and not be mauled by an undead dog.  But how do you unlock it?

As an easter egg, the game has a hidden "classic" camera angle mode from the earlier titles. Here's how to unlock it: Talk to the front door a couple of times until it says "?" instead of investigate.

There you have it.  Now that should be interesting in two player split screen co-op!

We'll have our review of the Lost in Nightmares on Monday, so be sure to check back!