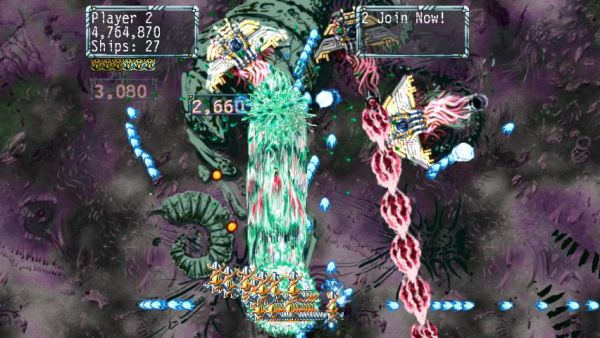 You'd think with a name like Mommy's Best Games we'd find a plethora of cake baking simulations and daycare running strategy games - you'd be wrong.  Instead Mommy's Best Games is an independent developer of such Xbox Live Indie titles like Weapon of Choice and the recent Shoot 1UP.  The latter is an interesting take on the top down shooter genre that involves players gathering 1UPs that immediately add extra ships instead of a pool of lives to use.

So how does that work?

It's simple really, the game constantly throws 1UP tokens at you that you must collect by flying into, and each one will add to your on screen ships for up to 30 in single player.   As you add ships you'll earn more powerful attacks, and with the left or right trigger, can expand or collapse your squadron based on what kind of enemies the game throws at you.  For instance, giant on screen bosses are usually better suited for a collapsed formation which yields a more direct and powerful attack. Co-Op in Shoot 1UP is a bit like a traditional vertical shooter but mixed up a bit.  With two players there's over 60 ships available to use, but it's not an even split.  Instead one player could have 50 and the other could have 10.  While the obvious co-op thing to do would be to split the ships evenly, sometimes it may play to your advantage to have one player the more powerful ship if their skill level is higher.

Speaking of, if you do find yourself out of ships - each hit by a bullet destroys one in your squadron - you'll be able to "steal" a ship from your co-op partner by targeting it with a reticule.  This gets you back in the action with an unique share lives pool concept.  It also adds a bit of a competitive element to the game.

Another unique twist to the game is the ability to choose different paths in levels, and even change how the game controls on the fly.  One level allowed me to have the game control like a top down shooter, giving me the ability to shoot and turn left and right as well as up and down.  These pieces add to the games replayability, and always make for an interesting moment in co-op.

Perhaps the best reason to like Shoot 1UP - the price.  The game is listed at only 80

or $1.  Though the game only features local co-op play I feel it's well worth it.

Next year Mommy's Best Games will be releasing a title called Grapple Buggy.  Be on the lookout for this one as it's a cross between Blaster Master and Bionic Commando.  While we were told the game doesn't have co-op now, we can keep our fingers crossed.