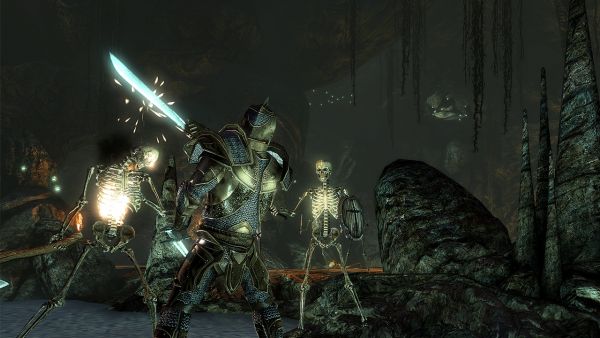 If you're anything like me, you took a look at the title Two Worlds 2 and went "Whaaat? Two Worlds 2? Gross." remembering the disaster that was sold to us not long enough ago. We at Co-optimus went behind closed doors to see what Southpeak has in store for Two Worlds 2 with the desperate hope they either learned from their mistakes, or we could make fun of them for making a sequel to that very borked game.

To begin with, we were greeted by one of the developers who immediately admitted that Two Worlds was not the best game in the world. Then we were escorted behind closed doors to sit through a short presentation demonstration combination. Joey was driving the game, and immediately we began to wonder if this really was the game that Two Worlds was supposed to be.

Visually, the environments were beautiful with a lot of detail in the way your character interacts with things. Physics played a big part in many areas, where the player was picking up boxes to toss around, rattling chains that were hanging on walls, etc. The lighting was even really nice with dynamic changes whenever a lamp was swinging, or the character walked by to cast a shadow. An impressive spin on the standard fantasy style game is the variety of areas shown off in this preview. Eastern style, standard Castles, Persian style, Egyptian theme, etc.

One really unique aspect of the game was the cut scenes played out in real time, but gave player control of their character to walk around whoever is speaking. It's amazing how such a simple thing seems to add so much to a game, but it was really impressive. The spell system, which was the one thing people seemed to enjoy in Two Worlds, looks really nice. Like the original it's based on a card system, but Two Worlds 2 has taken it to a new level. You could augment, buff, or tweak your spells to pretty much whatever you wanted. At first we were shown a simple ice spell, which was then augmented with a multiply card. It suddenly turned into two ice shots. Then a reflect card was added to the spell - suddenly our two shots were reflecting off walls. Next up? An ice golem card which summoned some minions to do your bidding which occurred alongside your dual reflecting shots of ice. The class system is supposed to give players a lot of flexibility with character creation. That is to say, each character has the ability to mix and match their skill sets to play however you feel like playing at the time throughout the game. The armor and weapons for each class were able to be mapped to the D-pad, so you can change how you play on the fly.

While the first Two Worlds had co-op play through the main campaign, Two Worlds 2 is taking a different approach. We were promised at 5-6 hour co-op campaign that bridges the story of the first game and the second. While it only currently supports two players, Top Ware hopes to see that number increase to four or even six. Along with this co-op campaign mode is a more social co-op mode based around limited areas and towns. Details on the mode were completely non existent, and in fact, we were told the team is still hashing out exactly how it would work. Also, it's a freaking Dinosaur.

They did mention that the depth of the main game was basically customizable to the player. Whether they wanted to get into all of the back story and read every book, or skip every cutscene or narrative dialog and just plow through. This may or may not apply to the co-op mode, giving us a happy medium as far as fantasy experiences together go for hardcore and less-hardcore gamers - because let's face it, the fantasy genre tends to be overwhelming at times. Which brings us to our next point - the state of the game.

While it's normal for preview versions to be missing content, we were told the game was almost in a beta state. None of the voices were in place, animations were incomplete, and the interface in its current state was all place holder. The developer walking us through the game told us that they were just working on polishing the game before they were ready to go.

When looking at the character and the way he moved, I was concerned that "polished" to Reality Pump didn't mean what they think it meant. So, in the vein of Barbara Walters, I asked the one important question that was probably overlooked. "How far along would you say Two Worlds 2 is to full completion?" The answer was a shocking 70%.

Looking at the product they shared with us, I'd say it looked closer to 55% complete at that point. All of the animations needed a lot of work, the only things I'd say were complete were the environments and the magic casting organizing. That being said, it's already on-par with the first game. So, if you were one of the people that joined the cult revolution of Two Worlds, congratulations - you have more Fantasy co-op action coming your way. For the rest of us, we're not convinced just yet.