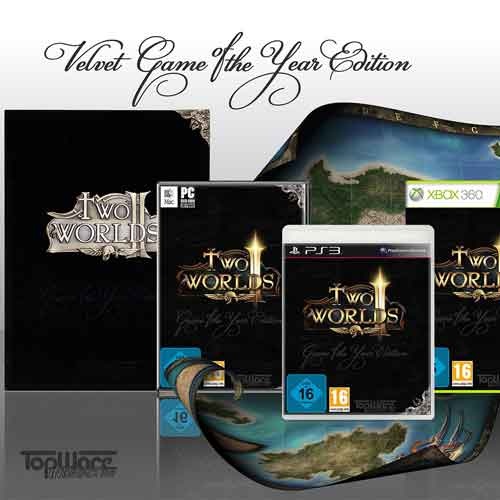 Two Worlds II is a rough-edged but robust RPG, filled to the brim with things to do in single-player as well as separate online co-op missions. In case that wasn’t enough, developer Reality Pump recently released  a full expansion pack, titled ‘Pirates of the Flying Fortress.’ They also plan to release a Game of the Year Edition that will include both the main game and the expansion later this year.

‘Pirate of the Flying Fortress’ costs $29.99 or 2400 Microsoft Points. Here’s what you get for all that scratch:

With developer Reality Pump focusing on feedback from both fans and critics alike during the development of the expansion, Pirates of the Flying Fortress™ includes upgraded character models and facial mapping, a plethora of additional enemies as well as new weapons with which to slay them, an entirely new continent to explore, the introduction of dynamic weather effects such as rain and fog, and of course it wouldn’t be complete without the inclusion of horse armor.

Pirates of the Flying Fortress™ content will also be available for PlayStation®3 (PS3™) owners of Two Worlds II™ via the PlayStation®Network in the coming weeks.

The Xbox 360 version also adds 9 new Achievements worth a total of 235 GamerScore. While $30 is a lot for downloadable content, remember that this is a fully PC-style expansion pack, not just a simple map pack. It runs for the same price as Oblivion’s ‘Shivering Isles,’ and that (wonderful) game didn’t even have co-op missions to share with your friends.

As for the Game of the Year Edition, here is the official description:

TopWare Interactive is releasing the Two Worlds II: Velvet GOTY Edition this October 18th and they are doing so with glamorous class! The TWII: Velvet GOTY Edition not only comes bundled with the sought after expansion Pirates of the Flying Fortress, but is also uniquely designed in a limited collector's box which is wrapped in black velvet (PC/Mac) or red velvet (console versions) and highlighted with metal corners made to look like antique brass. Moreover, there is a bold relief TWII logo of the same real metal at the top of the box. Along with the multi-lingual version of TWII, this collector's item also comes with all of the up-to- date upgrades. Additional extras include a huge double-sided world map and a valuable pirate head pin collectable, which subsequently is also available in-game! This exclusive item actually boosts the player's parameters if hefted to armor! Together with another bonus disc containing artwork, wallpaper, videos, an extended soundtrack and two additional PvP multiplayer maps. More Antaloor simply isn't possible!

This limited collector's edition will be available for PC, Mac, XBOX 360 and PS3!

The Game of the Year Edition sounds like a tremendous value for gamers who still haven’t entered Two Worlds II’s gigantic realm. The only curious part of the description is the release date. Retailers haven’t started listing the Velvet GOTY Edition yet, which means it likely won’t land in October. We’ll be sure to let you know when it gets a proper release date.