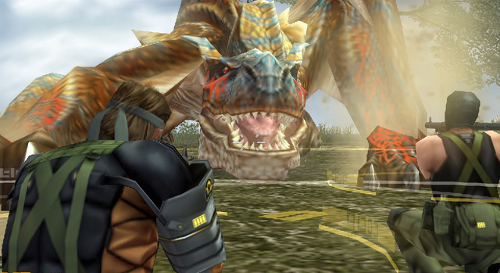 What happens you mix a well-known and loved co-op title with a well-known and loved title that just recently added co-op?  One would presume the answer would be "a whole lot of awesome," and we certainly hope that proves to be the case.  In a rather surprising reveal yesterday from Famitsu magazine, the latest entry in the Metal Gear Solid series, Metal Gear Solid: Peace Walker for the PSP, will include bosses from the popular dungeon crawler/MMO co-op franchise Monster Hunter.  While it's great that Peace Walker will be integrating some very solid co-op experiences into the game, we must admit that mixing these two titles together is a rather interesting choice and one that we're certainly eager to try out.  The crossovers and tie-ins don't end there, however, as Hideo Kojima had a few more interesting reveals today.

A couple years ago, Kojima and Ubisoft released a video that was taken to be an April Fool's joke of Solid Snake running around Metal Gear Solid 4 in Altair's outfit.  It was later revealed that this outfit was actually an unlockable in the game.  In a similar move, another Kojima/Ubisoft video was released on April 1 of this year that shows a tuxedo-ed Snake in Peace Walker diving into a bale of hay (complete with screaming eagle sound effect), and then moves around with the hay bale as if it were a cardboard box.  The player then sneaks up behind an enemy and proceeds to pull the enemy into the hay bale and knocks the foe unconscious.  Later on, a second player joins the first player in the hay bale for some co-op sneak-and-grab action (no, that's not a euphamism... we think). Snake once chased monkeys around a jungle and made snakes a regular part of his diet, so why not talk with raccoons?

In his press conference today, Hideo Kojima, the game's creator, announced that the video was not entirely a joke, and that players will actually be able to do the moves shown off in the supposed April Fool's prank.  What's more, it seems that Snake's world will become rife with all kinds of product placements, including AXE body spray, Mountain Dew, Doritos, and a Sony Walkman (which takes the place of the iPod in MGS 4).  Personally, I'm curious to see if the tie-in will go the other way and it won't be long before we see a "Solid Snake" fragrance from AXE.

Game tie-ins and crossovers have been around for some time, though usually not in a way that actually enhances the gameplay/co-op experience as the Assassin's Creed 2 and Monster Hunter crossovers appear to do.  The idea of product placement in video games, on the other hand, is one that's still fairly new and a bit controversial, and we're interested in hearing your thoughts on both of these topics.   Is it a sign of the progression of games that they've become as viable of a market in which companies may advertise as movies and TV shows, or should games be left out of the advertising space altogether?  Should more games, whether they're co-op or not, be "cross-pollinated" in such an obvious fashion in order to include actual gameplay elements in the games?