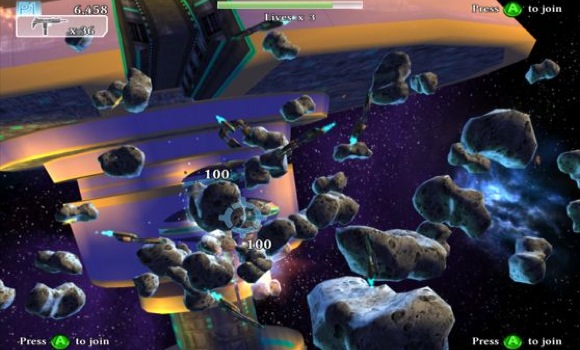 3D would seem to be 2010's version of HD.  Movies, TV, and even Nintendo's next great handheld have tossed their hat into the 3D ring.  But why wait when you can have 3D now?  Or at least, in May, when Attack of the Movies 3D will be released for the XBox 360 and the Wii.

Using the charming, if a bit old fashioned blue and red 3D glasses, Attack of the Movies 3D takes up to four players through levels based on cinema standards like zombie movies, giant monsters, and the like.  This looks to be a perfect title to pick up and play for casual gamers, or even non-gamers interested in the 3D technology.  It even comes with four pairs of the 3D glasses, a fashion accessory that surely no one can live without!


EDISON, N.J., March 15th, 2010 -Majesco Entertainment Company (NASDAQ: COOL), an innovative provider of video games for the mass market, today announced Attack of the Movies 3-D for the Xbox 360® video game and entertainment system from Microsoft. Also being released for Wii™, Attack of the Movies 3-Dallows thrill seekers the opportunity to play through some of the greatest action movie scenes of all time - in 3-D! The game, which will release for both platforms this May, comes packaged with four pairs of 3-D glasses to support four-player multiplayer action.

In Attack of the Movies 3-D, players become an integral part of movie scenes they can typically only watch. They are transported to six fantastic movie-themed worlds where they will battle large alien space cruisers, shoot underwater monsters, join the resistance against the machines and more.  Each scene features genre-based weapons to engage enemies, including zombie-slaying shotguns, automatic laser cannons and more. In addition, branching paths, changing enemy attack patterns, unique areas and environmental challenges ensure that players never experience the same fight twice.

Developed by Panic Button Games Inc., Attack of the Movies 3-D is expected to release this May. For additional information about Majesco's exciting line of products, please visit www.majescoentertainment.com.