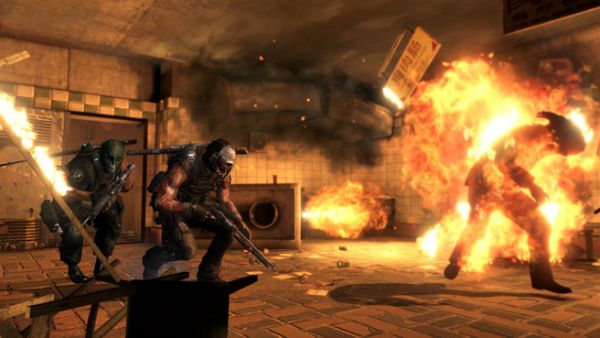 Army of Two: The 40th Day originally contained seven meaty chapters, which we enjoyed playing through. For $9.99 on the PlayStation Network or

800 on Xbox Live you can now add the Chapters of Deceit downloadable content - two more sections of the campaign that give you an alternate story arc and plenty more bad guys to kill.

The first mission of the DLC separates Rios and Salem and strips Salem of his weapons. Using melee combat and communication, you are charged with reuniting the duo. The sequence is entertaining and challenging, but mercifully short. Once together, be prepared to experience heightened difficulty - the rest of the Deceit campaign content makes the first seven chapters look like child's play.

Almost right off the bat, you'll meet a new character and you'll have a chance to temporarily wield a new weapon - the flamethrower. While fun, the flamethrower actually causes a lot of collateral damage in the wrong hands, and since it's only available during a particularly hairy portion of one level...it's really just a short-lived novelty. We quickly swapped back to our more effecient custom rifles. The new character is not crucial to the gameplay at all, but she is the subject of the DLC's sole morality choice, and another grimace-inducing one at that.