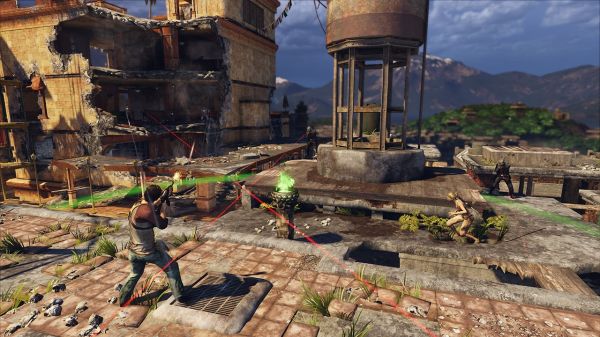 Despite a new co-op mode "not being likely" we got information about a new co-op mode coming to Uncharted 2 via a leak.  Today we have the official announcement and screens straight from Sony and Naughty Dog that unveil the next piece of content to be released on April 22nd.

The new co-op mode is called Siege,  which sounds like a cross between a territories style match and a survival mode like Gears of War 2's Horde mode.  The mode has players holding a territory on the map while surviving waves of enemies.  During the course of a match the territories will shift between locations, forcing players to work together to move and work together to live.  Expect the action to be incredibly fast paced and hectic.

Two new maps will be included for specifically for Siege  -

The Highrise, which provides "plenty of opportunities for players to get the high ground on their opponents," is set in Nepal.

The Museum has fortune hunters working "across rooftops, and through twisting corridors," along "numerous flank routes" and over "secret climbing routes" to have a leg up on enemies.

Additionally the DLC will include six new multiplayer skins and 11 new trophies, most of which appear to be geared towards co-op.  While it's still not a true co-op addon for the game, it Siege does sound unique enough to make the content worth while.

I'll Cover You – Get 50 Defender Medals

Jack of All Trades – Get 15 Triple Threat Medals

Back At Ya – Get 50 Retaliation Medals

Kneel Before Z… – Get 5 Put-em Down Medals