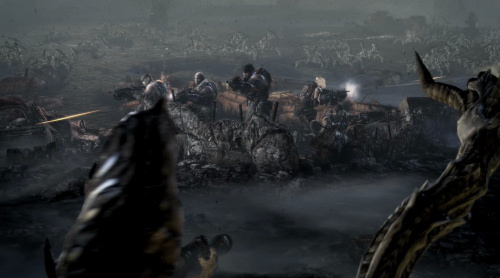 Gears of War has a long standing tradition of mixing visuals, music, and emotion in their trailers for the game.  It started with the Mad World Trailer for Gears 1, followed by The Last Day for Gears 2, and now with the third game we have a trailer called Ashes to Ashes.

It was perhaps the worst kept secret so far this year, but Gears of War 3 was revealed last night on Jimmy Fallon,  a few days later than originally anticipated by Cliff Bleszinksi.  Not much was revealed about the game, though the trailer certainly sets the tone for an "all hope is lost" type scenario.

We must say Dom's new look sporting a scruff looking beard is quite different.  It's also great to see confirmation of the previously rumored female COG, take note Crackdown 2.  We also get a glimpse at a new enemy or two.  All in all it's a pretty solid trailer for a game that's about a year away.  If you're curious about the song from the trailer, it's "Heron Blue" by Sun Kil Moon.

Finally the trailer once again sparks the rumors of - "Just how many players will we have in co-op?"  The trailer is showing five COGs battling it out against enemies, though the scene looks closer to something we'd see in the already existent five player co-op Horde Mode from Gears 2.  Could we all finally get our dream of a four or five player co-op campaign?  Time will tell, but the final text of the trailer might hint at us losing one of our dear friends.

Brothers till the end. These Gears 3 avatar items should be up on the Marketplace very soon.