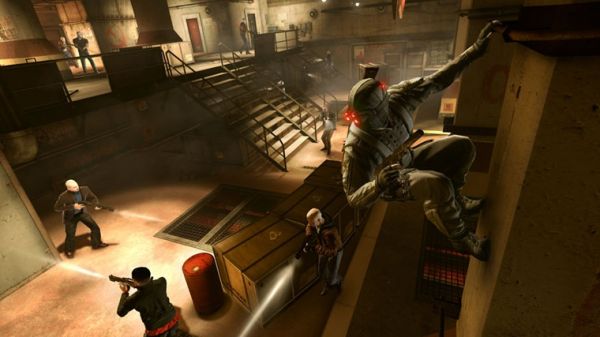 Splinter Cell Conviction is out this week, and with it comes loads of co-op play.  Seriously, Ubisoft jam packed this game with a co-op campaign and a handful of replayable challenge style co-op missions.  So while everyone is complaining the game is only 5 hours long, they seem to be neglecting the meat of the package.

After playing a bit of the single player I moved on to check out the co-op modes, but sadly my spy backpack was missing one crucial piece of gear - a headset.

The problem comes from my current living arrangements. I'm forced to make a trade off;   it's either play the game with audio I can hear using headphones, or have the audio turned way down (as to not wake a sleeping 1 year old) and have chat capabilities.  For Conviction I chose the former, figuring audio queues are a major part of the gameplay.

First up I fired up the matchmaking under Co-Op for Hunter mode.  This is the mode where you need to kill off waves of enemies.  We started infiltrating a mansion, with three guards spotted outside.  I quickly marked them so my partner could see them too, as we split up around the monument in the courtyard.  Silently my partner dropped the first guard, and I snuck up on the second and snapped his neck from behind.  This earned us our first marked takedown to use. As we entered the building we took alternating shots removing the lights, which spooked guards.  Thankfully we were quick enough in most cases to take them out before they could alert their friends.

But as we reached the top of the first area, my partner managed to get spotted (and shot) which brought in reinforcements.  The unique thing about this mode is while there were only 10 guards at play in the first wave and area, alarming the guards brought reinforcements almost doubling the amount we had to kill.

Quickly Archer, who was my partner, dropped to the floor below drawing all enemy fire.  I quickly worked the balcony area snapping the necks of the enemies trying to take him down.

After clearing that battle we moved onto the next area and repeated, but somewhere along the way I picked up a shotgun.  Sounds good in theory, but shotguns aren't silent.  And the first guard I decided to shoot with a thunderous BOOM from my street cannon,  unleashed a wave of 20 enemies at us.  It was too much, and quickly we fell. Next up we gave Last Stand a try.  In this mode there's an EMP with a set amount of health and waves of enemies come in to try to take it out.  The biggest difference between this and Hunter is your team of two are basically staying put.  Hunter has you moving through an area, Last Stand has you guarding it.

The mission we chose had the EMP in the middle of a hall with two floors to cover, and the waves of enemies coming from many different directions.  Thankfully we discovered a gadget that set out a pulse burst locating the incoming bad guys - something that was hard to do in the dark.

We seemed to be doing well, but the frantic nature of the mode, specifically how the enemies came from different directions, caused us to get split up quite often.  It was then a game of constant revival between us, keeping each other alive.  One neat trick is being able to "fake death" so enemies leave you alone after downing you.  Then, once their backs are turned attempting to take out your partner you can gently remove them from the battlefield with your silenced pistol.

This method saved our tails multiple times, but we were quickly overwhelmed and didn't make it past the second wave of consecutive play throughs.

Despite being "unsuccessful, " the game does a good job of communicating position and intent with your partner - whether it's the outline of where enemies see you and your partner, or the outline of enemies thanks to a partner's view on them.  It's because of this, the lack of headset wasn't has hindering as I thought it would be.

There's still two more co-op modes to try - the Campaign and Infiltration, which is an exclusive mode.  I'm thinking Co-Op Night is going to be A LOT of fun.