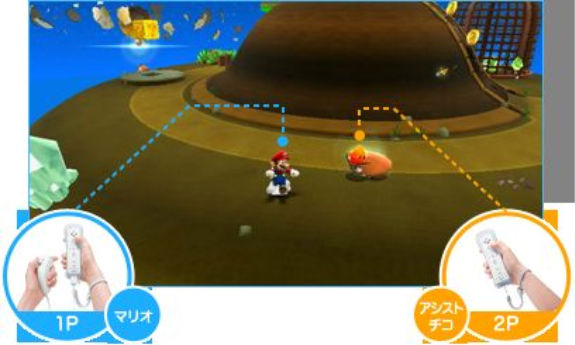 Super Mario Galaxy was a fantastic game, but the co-op elements were less than stellar, if you'll pardon the pun.  You'll recall a second player could join in and shoot stars at enemies, and that was pretty much it.  Perfect for younger gamers, but not exactly compelling for more experienced Mario lovers.  If the above screenshot is any indication, co-op in Super Mario Galaxy 2 will be better.

The screenshot is from the Japanese language SMG2 site, and would appear to feature more in-depth co-op than the previous game.  Apparently 2P has some sort of control over Mario's star-shaped buddy.  The lack of the nunchuk attached to 2P's Wiimote is a bit worrying, but still, our best guess is that the co-op will be improved in some way.  We'll be keeping a close eye on these developments.