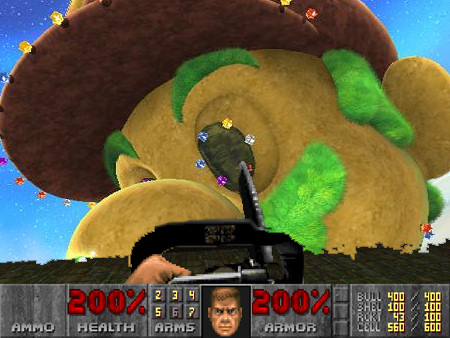 Two co-op games are out this week and they might be the most drastically different co-op titles we've ever had in a single release alert.  We've got family friendly to mature rated here folks - and when you combine them together you get one really trippy dream.

Up first is Super Mario Galaxy 2 for the Nintendo Wii.  The game is out now with a two player co-op mode that's pretty much BYOB.  That's ok though, as everything we've heard about the game makes it sound downright phenomenal.  New worlds, more suits, new enemies, and much tighter gameplay make this sequel a must own for Mario fans.    Amazon.com still has the game for $49.99 with $20 of video game credit towards your next purchase.

Next on the list is DOOM II for Xbox Live Arcade   The four player co-op title with both split screen and online play has been MIA for quite some time, but it now appears it will finally see the light of day.  There was no price set for the game yet, but you know you're going to buy it anyway.  It is DOOM after all.