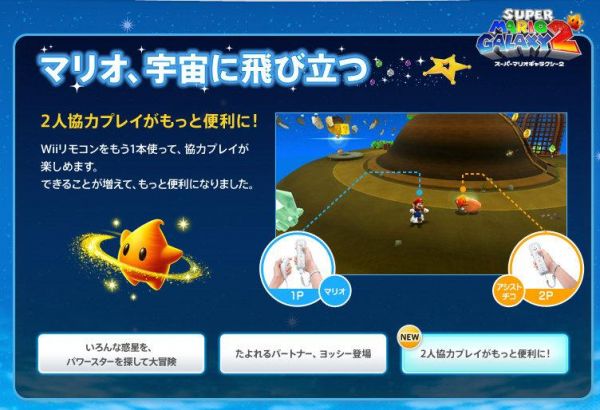 My Japanese is a little rusty, but I am sure they are saying, "It's a me, Mario!"

In a wryly ironic fashion, the head honchos of Nintendo have announced that the upcoming Super Mario Galaxy 2 will come prepackaged with an instructional DVD.  On the DVD will be a simple guide on how to play the game, including the new 2 player mode that has one player taking control of Luma, the happy star like creature from the first game.  What is ironic about offering a DVD you ask?  The fact that the Wii is the only current console not to allow DVD playback.  It is a real possibility that you will have to boot up you 360 or PS3 to watch the Mario DVD.

This DVD is the next step in removing the traditional paper instruction manual which has seen the likes of Ubisoft informing the gaming population that they are now only offering paperless manuals.  I for one will miss the days of the bulky leaflets written in ten different languages.  If they are doing away with them, I want each game to come packaged with a little vial of 'new-game-manual' smell.  Until, this eau de game arrives I will have to make do with the one new image of instructions for Super Mario Galaxy 2's co-op mode.