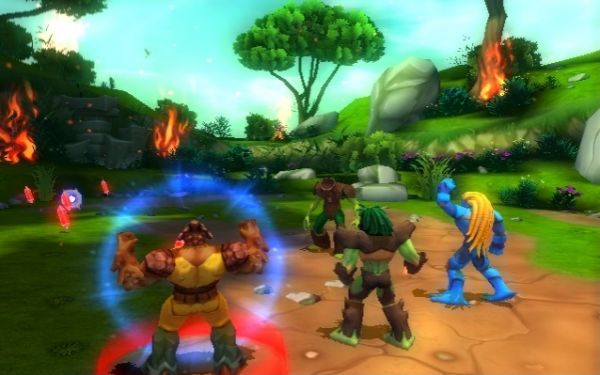 Gormiti: The Lords of Nature is an upcoming Wii and DS game based around a popular television show. The show is on Cartoon Network, and features a solid storyline and a toy line of awesome miniature toys to boot. The gist of the world of Gormiti is simple; various armies are based off of the elemental forces of nature, locked in battle over 5 amulets. The "bad guys" of the group are the Lava Lords, led by Magimion. If the 5 amulets are reunited by the evil Magimion, a portal will open and the Gormiti will have free reign of Earth.

Your mission should you choose to accept it, is to stop Magimion using whatever means necessary. The Wii version of the game even gives you a hand-up by having co-op. Each Gormiti has a unique power, and as a co-op team you have access to two separate powers. There are 3 available "Lords of Nature" at your disposal to solve puzzles, explore the 5 Gormiti domains, and experience the full storyline of the game complete with original voice actors. Konami's president, Shinji Hirano is certain this experience is one the fans will enjoy.

"The Gormiti license has grown tremendously since created in 2005 and we are excited at the opportunity to deliver the first interactive gaming experience for fans of the franchise. The development team is looking forward to adapting the Gormiti storyline into a rich and entertaining video game that will allow players the ability to interact with their favorite characters in a new way."

We're not 100% sure how the co-op will work, but we do know the gameplay will be an action/adventure game, complete with awesome moves both long-range and close-up melee style. We're excited to see what happens here - yes, the toys are what did it for me.