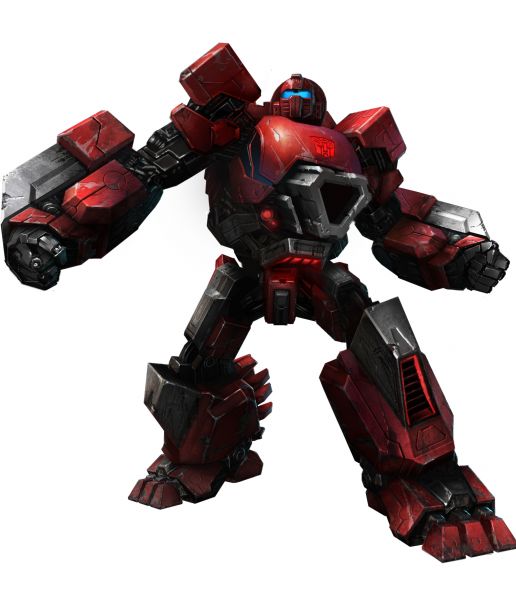 Next month, for the first time, you'll be able to "transform and roll out" with a friend.  Transformers: War For Cybertron will feature online drop in/drop out co-op through the entire campaign.  As we approach the game's June 22 release date, more characters and a few exclusives have come to light.

Warpath and Barricade, pictured above, are the two latest playable characters revealed.  Warpath is best known to aged Transformers fans like myself as the adorable little tank mini-bot from the venerable G1 series, circa 1985.  It appears he is less adorable and more intimidating in the game!  Barricade is best known as the wicked Decepticon police car from the 2007 film, but his in-game model is more like that of an obscure F1 race car Micromaster character of the same name.

Pre-order exclusives are the order of the day, whether you like it or not, and Transformers: War for Cybertron is no different.  Thus far, three excusives have been revealed.  Fan-favorite Shockwave is the Gamestop exclusive, tank-like Demolishor from Amazon, and the memorable G1 character Jazz will be available at Best Buy.  I certainly hope these characters will be available as DLC eventually, as I have a bit of an obsession with collecting as many Transformers as I can.   What exclusive are you the most interested in?

Description: Warpath is loud, confident, skilled and devoted to his fellow Autobots.  He is also partially deaf from his amazingly large cannon.  His favorite past time is showing his friends how he can split a hex nut a mile and a half away with his tank gun.  Extremely well armored to go along with his extreme stubbornness and thick skull, Warpath always loves to press the battle to the Decepticons.

Description: Barricade is a true speed demon, powering his engine to speeds faster than some jets.  He is a brutal leader on the battlefield, scolding Decepticons that do not perform up to his and Megatron’s standards.  His favorite tactic is to goad Autobots into transforming and chasing him, then taking the Autobots on fatal routes that only he can navigate.


Transformers: War for Cybertron challenges players to become the ultimate weapon as a TRANSFORMERS character in the final, epic war that will determine the survival of their entire race.  Armed with a diverse arsenal of lethal, high-tech weaponry and the ability to instantly convert from robot to vehicle at any time, players will engage in heart-pounding battles on land and in the air in this gripping, 3rd person action shooter set in the TRANSFORMERS’ war-ravaged homeland.  Complete with several multiplayer modes, Transformers: War for Cybertron allows gamers to play through story missions with their friends in drop in/drop out online co-op, and also create their own TRANSFORMERS character for competitive head-to-head multiplayer modes, choosing among four distinct character classes, personalizing its look and selecting from a huge variety of weapons, skills and abilities.