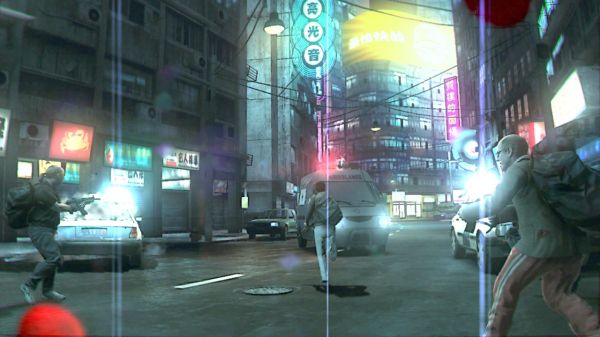 The Fragile Alliance mode is making a return in Kane and Lynch 2.  If you never played this co-op-ish multiplayer mode in the first game - here's how it works.  Your team of four is set to rob a bank,  but breaking in is only half the act.  Once you snatch the cash you have to make a clean escape and make it to the getaway van.

Sounds simple, but there's a catch.

At any point your team can turn on you to increase their share of the loot.  If your team decides to go all anti-co-op on your ass, you'll get a chance for revenge when you respawn immediately as a cop, attempting to take out those that just ended you.

It's a really interesting concept, and in a lot of ways, it tests the boundaries of co-op.  Recent hands on impressions with the updated version of the mode have been extremely positive.

The whole thing was fast-paced and felt really well thought out. We continued playing round after round, while the cops were growing in number and intelligence, using better tactics and even releasing police dogs to hunt us down. Combined with the ever-present possibility of a traitor from within stabbing me in the back, it was really tense. My group eventually failed three rounds and the match ended.

I know I had a lot of fun with the mode in the first game.

In other Kane and Lynch news not only is the game going to get a movie starring Bruce Willis as Kane, and Jamie Foxx as Lynch in 2011, but DC Comics is putting together a Kane and Lynch comic.  The comic is set to launch in August of this year.

The Kane & Lynch comic book series is penned by Ian Edginton. Edginton has been in the comic scene for over two decades and worked with DC, Marvel, Dark Horse, Heavy Metal, Top Cow and others. He’s best known for his work on properties such as Aliens, Predator and Terminator through to Planet of the Apes, Star Wars, Star Trek, Doctor Who and Torchwood. Chris Mitten, who also works on the series WASTELAND, is the artist for Kane & Lynch and New York Times best selling artist Ben Templesmith, whose notable works include 30 Days of Night and Fell, is the cover artist. Both artists are known for their raw, sinister illustration style that fully embodies the Kane & Lynch feel.

I've always said the first game had some really interesting characters and plot elements, it always felt very Hollywood, so it's good to see it branching out to other media.

For now enjoy some new media from the Fragile Alliance mode, including screenshots and video.