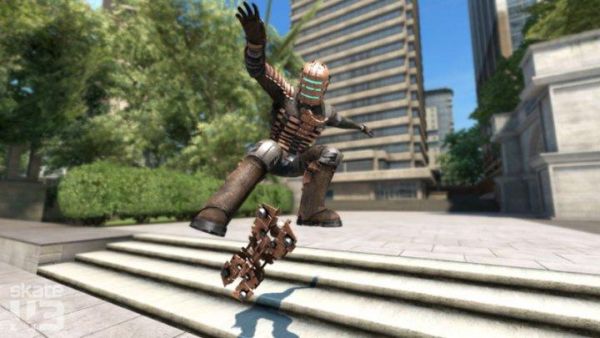 Character mash ups are becoming the latest trend in co-op gaming with the likes of Marcus, Frank West and Wesker appearing in Lost Planet 2.  EA are not far behind as they have revealed that Isaac Clarke from Dead Space is an unlockable character for Skate 3.  Simply enter the code DEADSPACETOO into the game and you will unlock Isaac and his board.  More images of Isaac ollieing and pop shoving-it are available on the Dead Space Facebook page.  Even space engineers haunted by the voices of the undead need some down time.  He can always use the edge of his new board to remove some alien limbs if things go awry in modern day America.

Which other EA characters would look good on a board?