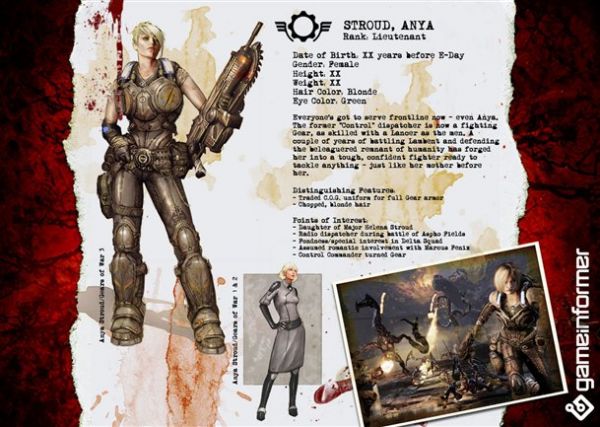 Gameinformer.com has the low down on all things Gears of War 3. According to their "Coalition of Ordered Governments," which seems to be "leaking" a profile or other news bit about Gears 3 just about every day this month, there are a few interesting profiles of the old and new Gears characters. The biggest change has been the evolution of Anya, going from office babe to badass soldier, to really badass soldier, which is evidence by the art that goes with her profile page. Not only did Anya Stroud get some amazing new armor, but she is now sporting a spunky haircut to boot. Her character is looking more and more rounded, maybe she'll be able to balance out some of the testosterone fest of the Gears world. Naaah, why would we want that? Other profiles shown on the site are Marcus Fenix, Augustus "Cole Train" Cole, and newcomer Jace Stratton. It's a battle to the end it would seem, and everyone is involved this time. The one profile I'm personally waiting on is Dom, and something about his amazing beard.

Among the character profiles, there has also been an interview, story reveal, and we're still looking forward to several other new goodies to go live.