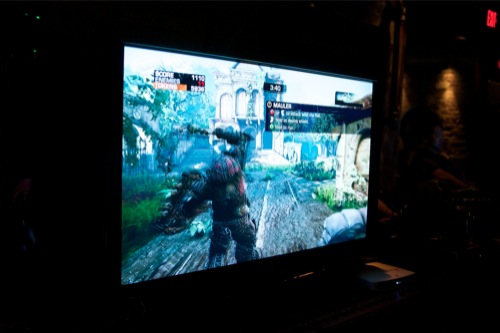 Epic has recently announced a new Horde style mode for Gears of War 3 called Beast Mode.  While it may appear like an inverse of Horde mode on the surface, it's actually an incredibly deep cooperative experience that not only requires team work and communication - but some careful planning and strategy.

In the early waves of Beast you'll only have a few monsters to choose from - tickers mostly.  You'll seek out and destroy some enemies as a ticker exploding with satisfaction to earn your team tokens.  As you earn tokens from kills and as the waves progress, you'll unlock other monsters to control as the horde.  So while a ticker might only cost 5 tokens, a shotgunner locust might cost 50.  A Kantus may cost 100, or a boomer may cost 250.  The final numbers aren't set in stone and Epic isn't saying what other ways tokens are earned in matches - though you do seem to get bonus tokens for doing well in a round.  This will make token management key to surviving.

The CoG soldiers you face off against aren't always the likes of Marcus and Dom - or what's called "Hero Units."  Instead you might just have some civilian militia trying to take you down, usually in greater numbers than the normal five a horde would face off against.  These good guys tend to dig into an area of the map and fortify it with turrets and the like making your stay generally unpleasant. All of the monsters I tried control pretty similar to the other characters in the game - though each one has a special move.  The grenadier can hurl infinite grenades with a slight cool down between tosses.  The Kantus for can heal any character on the screen - just like in the other modes.  It's a tradeoff though because he's so tall he can't actually duck behind cover - so you can't just have a team of Kantus...Kantai(?) rezzing each other all over the place.

This is where the strategy comes in for your team of five players.

Players need to call out their role in the later waves to be truly effective.  Someone may choose a mauler to draw fire while other players choose a ticker or a new serpentine like creature to flank an enemy position.  There's a new boomer gun that shoots grenades that burrow underground and through cover making the CoG stay behind a sandbag generally unpleasant.

The demo we played had four waves of enemies with increasing difficulty.  As the waves got harder we saw more and more hero units who had abilities like the Hammer of Dawn and the boom shot.  Epic said the current build of Beast mode is the tip of the iceberg and they have big plans for it.  There's a lot of potential to be had with Beast as an addition to Horde mode.  I find it amazing that there will be three separate co-op modes in Gears of War 3 - that's an incredible value for co-op gamers.