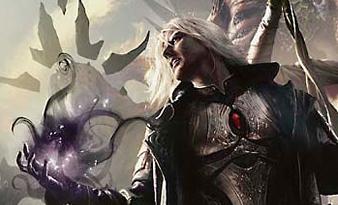 The long-awaited second expansion for Duels of The Planeswalkers was released a few weeks ago.  Unimaginatively titled "Expansion Pack 2", it adds a little bit of everything, tweaks a few things here and there, and in most respects does exactly what an expansion should.  But is it worth downloading, or would your points best be spent on something else?

A new singleplayer campaign, as well as a new two-headed giant campaign, have been added.  Both are on the short side.  Two new planeswalker opponents are available.  Rhys, the first, uses a green/white deck based on the Zendikar block's landfall mechanic.  Sorin Markhov is the other new planeswalker, and he is the final boss.  He's extremely tough, but more on that later.

Three new decks are available, each unlocked by playng the single player campaign.  The first is Rhys's green/white deck, and the second is a new deck for Chandra, one of the opponents from the original game.  Chandra's new deck is far more potent than her first, abandoning the goblin subtheme for more straightforward burn spells.  The last new deck is a tweaked version of the previous expansion's boss' deck.  Nicol Bolas' red/blue/black "Eons of Evil" is based on bringing dead creatures back to life, and I found it quite fun to play.

It's too bad unlocking it is not fun at all.  Sorin, the new boss, has a deck that is ridiculously overpowered compared to any of the others.  Based on efficient vampire creatures, coupled with life-draining effects and plenty of removal, the deck is almost good enough to be played in a real life Magic tournament.  It took me at least a dozen tries before I succeeded, even when using fully unlocked decks.  An extremely solid draw on my part, plus some puzzling AI choices allowed me to pull off the win.  The difficulty of the last boss is way out off the curve, and should have been eased up considerably.  Of course, Sorin is the last fight of the two-headed giant campaign, too, coupled with another powerful black deck that makes the challenge even tougher.

Other new feaures are fairly standard.  Avatar awards are now available when six decks have been fully unlocked.  A few decks have been changed a bit, and all decks have at least three new cards available to unlock.  New puzzle-style challenges and a few gameplay changes round out the mix.  There is still no online co-op play whatsoever, which is inexplicable at this point.  Additionally, players cannot alter their decks beyond choosing which unlockable cards to use;  this deck tweaking aspect is one of the most enjoyable parts of Magic, and really should be implemented into Duels of the Planeswalkers sooner than later.

The game is still great fun, but if more content-light expansions like this are released, players may begin to get bored and stop buying.  I feel "Expansion #2" is a worthwhile purchase, largely because of the value of the earlier releases, but I'll definitely think twice about buying future expansions unless they bring more substantial gameplay changes.