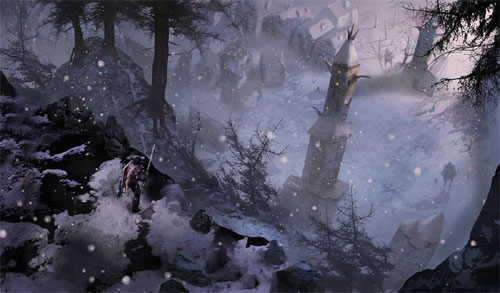 A new developer and publisher also means some new directions for Dungeon Siege 3, one of the most noteworthy things being that DS3 will be available on consoles (the PS3 and Xbox 360). Some things, however, will remain the same. Staples to the series, like 4-player co-op and NPC companions will stay.

As far as the game's story goes, Obsidian definitely has a good amount of RPG experience up their sleeves. They've done many a sequel to a prominent game, responsible for titles like Neverwinter Nights 2, Knights of the Old Republic 2, and Fallout: New Vegas. They're also the developer behind recently released Alpha Protocol. A small blurb has been released regarding DS3's story:

Torn asunder, the delicate balance of power between the kingdom of Ehb's powerful factions has fallen apart. As one of the few remaining members of the disgraced protectors of the land, the 10th Legion, it is up to you to rebuild the once great Legion and stop Ehb from falling into darkness. Joined by a group of unique companions, you will travel through the striking land of Ehb defeating all manner of villains and beasts through a combination of heroic abilities, screen shaking magic and pure cunning.

I had quite a bit of fun back in the day with the co-op in Dungeon Siege 2, and I've been hoping for quite some time that they would make a third game. Not a whole lot has been announced as of yet regarding Dungeon Siege 3, but we'll be sure to keep you guys posted.