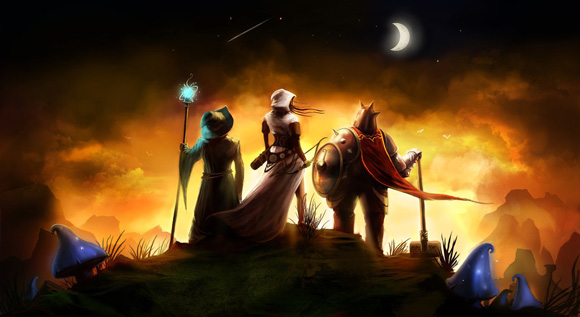 "Trine probably could have doubled its sales and success had online co-op been included."

That's a quote from Joel Kinnunen, associate producer on Trine and Lauri Hyvärinen, CEO of Frozenbyte in a post mortem write-up on the game over at Gamasutra.

So why do we get hundreds of negative emails and forum posts about co-op? Because it's not online. Gamers these days expect that co-op means "online" by default, and are sorely disappointed when they find out that Trine does not have any online multiplayer features.

While the quote the online portion as a critical miss for them, it really is a two way door.  Totally neglecting an entire audience in any game will result in much lower sales.  If there's one thing I've learned from managing the community on this site it's that we have just as many people vocal about the lack of couch co-op as we do the lack of online co-op when a game is announced.

The post mortem also talks about what exactly happened with the game and it's PSN port, and why it kept getting delayed over and over.  I found it surprising that the PSN version of Trine was actually planned to release before the PC version!  They also talk about the art department and how the game rapidly changed over time to become the beautiful finished piece, and just how much work went into the first trailer in which they revealed the game to world.

All in all it's a great read for fans of the game or anyone looking to see how a small studio creates a title and the technical and political hurdles they can encounter.