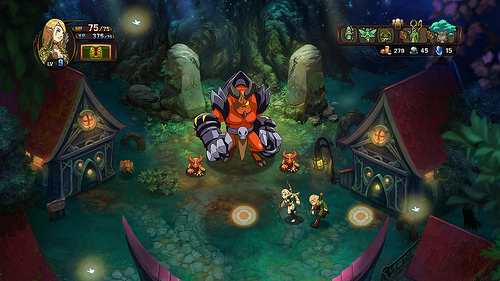 If there's anything we love here at Co-optimus, it's playing together. While you'll still be able to do that in the upcoming PSN/XBLA game Might and Magic: Clash of Heroes it's not quite as co-op as we originally anticipated. Originally the puzzle RPG was thought to be a 2 player versus AI mode, but after a bit of digging on Might and Magic we discovered that the "co-op mode" is actually 2vs2 online and local multiplayer.

According to Nathan Vella of Capybara studios:

"Clash of Heroes HD will have 2 vs 2 battles as an online/local multiplayer mode. We call it ‘coop’ as each team will need to work together in order to be victorious against their opponents."

Not to be a co-op snob, but that definition doesn't exactly comply with our official terminology guide. Players will have to work together to defeat the other team of players, but the same can be said about any other team based versus game. Unfortunately this news puts Might and Magic off our collective radar, though I'll still look forward to the beautiful single player experience. The game is said to be a nice mixture of puzzle and turn-based strategy elements, neatly wrapped in a 2D HD fantasy setting.