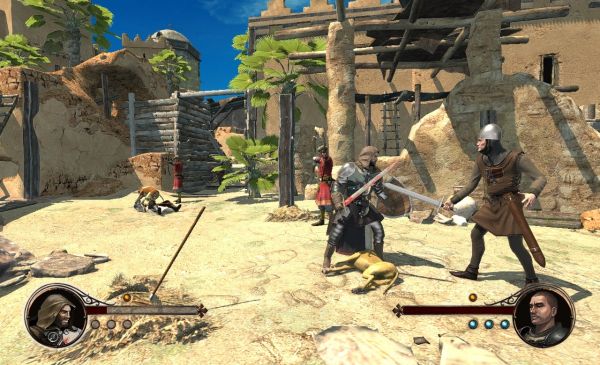 We got an early look at The First Templar at E3 2010 this year, the two player co-op game is a bit of a rarity.  It's a mix of action with some light RPG elements that make it like a mix of Dante's Inferno and Assassin's Creed.  The game is even semi-historically accurate.

Players pick from one of two characters, though the beginning of the game has a trainer that's a third character.  While one character is the Templar is the muscle of the operation the Noble Woman or the Trainer is a bit more acrobatic and flexible.

Working together the acrobatic character is able to move around and flank enemies, grapple them and hold them for the Templar to come in and finish.  The game itself is linear with about twenty different areas to explore across numerous missions.  As it stands now there's not much going on in the game world - so hopefully the developers will fill it with some mini combat missions or something while you travel between objectives.

Speaking of the game world, the game is running on the same engine as Tropico 3 - which is surprising - because the game itself is a 3rd person action game where the view is down in the trenches.  The forest environment looked great - and was definitely on par with other top quality games out there now in terms of fidelity.

The mission I saw demo'd had the pair tracking down a giant beast, including searching for clues and then following the footprints left behind.  When the final game ships there will be plenty of combos and skills which you'll unlock through experience.  Co-Op play will be both offline and online on Xbox Live and the PC.

The First Templar still has a ways to go but it definitely shows promise.  As of now the game is slated for a spring 2011 release.