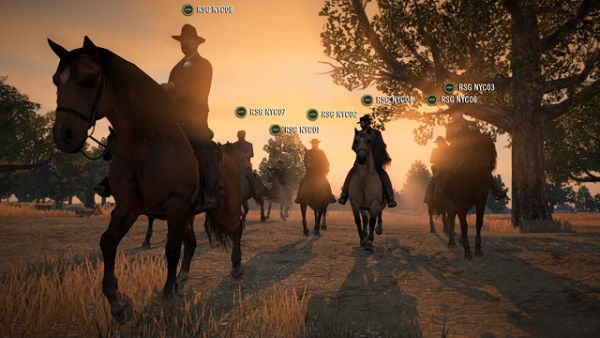 After our PAX East preview, I've been itching for more Red Dead Redemption news, specifically the co-op type. I nearly jumped out of my saddle when I saw that Rockstar Games has announced that Red Dead Redemption will get full multiplayer support, but the details aren't going to be unveiled till April 5th.  The PR speak has it "setting a benchmark" for multiplayer in an open world game.

How about a benchmark in western games by creating some kick ass co-op?

I know we've touched on this before but the western genre is begging for a proper co-op experience.  Just look at that screenshot up there of a gang of players riding their horses into the sunset, ready to rob trains and do cowboy stuff like eating beans by the fire.  SO AWESOME.

To be honest, we aren't completely just throwing this out there as a "there better be co-op" news piece.  Taking a gander at the official achievements for Red Dead Redemption reveals a few that might hint at some co-op based gameplay.   The one that caught our eye was called Posse Up - which has players creating a posse and having the maximum number of members.  There's a lot of mention of "Public Free-Roam" as well - so perhaps this mode will allow players to do whatever they damn well please in the old west, creating their own co-op experiences on the fly.

A cowboy can dream, can't he?