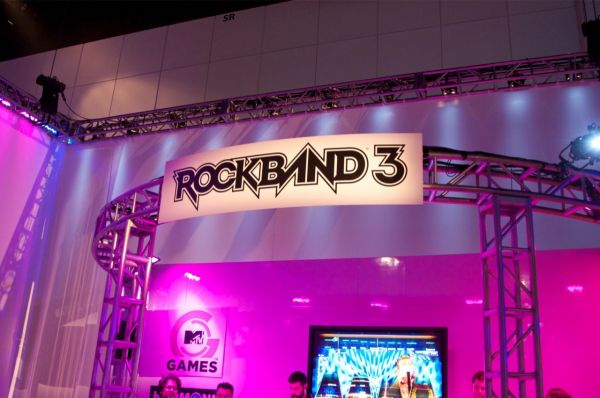 By now you've seen just about all that you need to know about Rock Band 3.  What we have here quite possibly the pentultimate music game for a wide range of players from beginners to actual musicians.  Harmonix has finally created a game that's not only a game for fun, but a learning tool for budding musicians.  But despite all that there is more than there appears to be on the surface with Rock Band 3.

You can tell that Harmonix has spent a lot of time simply studying how people play music games.  So the first change you'll notice is the lack of a menu system, instead we have what's being called "shells."  Think of it like the Steam overlay on a PC - except each player gets their own (non intrusive) shell to manage how they play the game.

The perfect example of this is when you get a group together and you're in the process of picking a song and just when someone is about to pick a track your drummer decides to go all Keith Moon and backs your band to the menu.  A scenario like this can no longer happen in Rock Band 3 because each shell controls only that player.  Using this players can drop-in and out of any game mode, change the difficulty or instrument on the fly, and tweak various settings to their own liking all without interrupting other players.

On the instrument side of the fence you already know about the addition of keyboards which also yields many new songs featuring keyboard like instruments.  Even if you don't have the keyboard or your own keyboard with adapter you can play the keyboard parts on any of the guitars - just don't expect to play it on pro mode.

Speaking of guitars and pro mode there are two "real" guitar options now for Rock Band 3.  Mad Catz will launch a guitar with an obscene amount of buttons that will mimic playing a real guitar with actual fret and chord positions.  More interestingly though is a guitar being made by Fender which uses optical sensors on the neck to communicate with Rock Band 3.  During the demo with this guitar, the Harmonix rep actually plugged the guitar into an amp while playing a song on Pro mode yielding the same output as the game from the amp.  There's no word on pricing for either of these fine instruments - but if I were you I'd start putting my pennies in a jar.

When you combine all the instruments - Drums, Bass, Guitar, Keyboard, Lead Vocals and Harmonies you can have a full 7 player co-op experience going.

By the time Rock Band 3 launches the entire catalog will contain over 2000 songs - all playable in the latest version of the game.  Harmonix has included some advanced sorting, filtering, and searching capabilities to make it easier to find the songs you want to play.  You can also create and save set lists as well as share them online.  The game truly is all about the music.

It's going to be hard for Harmonix to top Rock Band 3.  I'm really not quite sure what's "next."  Perhaps there doesn't need to be a next.  The game itself is looking great with slightly updated visuals and a few visuals tweaks here and there.   Rock Band 3 will hit Xbox 360, Wii, and PlayStation 3 this fall.