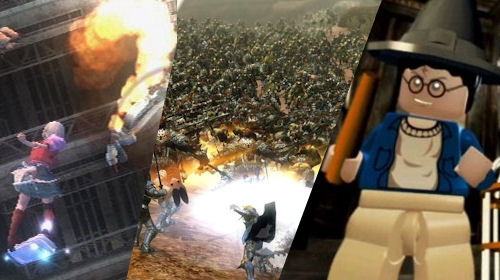 We've got quite a few co-op titles out this week with just about something for everyone.

LEGO Harry Potter: Years 1-4 is out on the 360, PS3, Wii, and PC sporting 2 player local co-op throughout the entire story.  It looks to continue the tradition of solid LEGO titles but adds in some nifty features like a variety of spells to cast.   You can snag it right now on Amazon for and receive $10 in Video Game credit.

Ninety Nine Nights 2 hits the Xbox 360 this week with two player co-op missions over Xbox Live.  N3II is all about scale and fast combat and it's a game that takes the Dynasty Warriors formula and adds a bit of maturity to it.

Sin and Punishment: Star Successor is out for the Nintendo Wii.  Developed by Treasure, makers of Ikaruga and other popular SHMUPS, S&P2 is the sequel to the classic franchise reborn with the help of motion controls.  The game features two player local co-op.