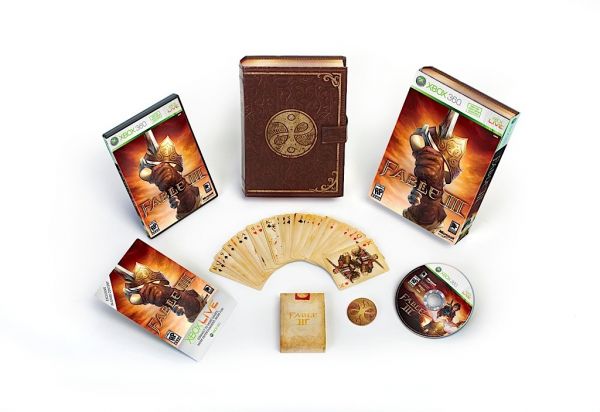 If you don't care about any of those awesome goodies picture above in the Fable 3 Collector's Edition, perhaps downloading the game in pieces is more up your alley.  We've already heard Fable 3 will be Episodic in nature, and now word comes straight from Lionhead that episodic digital distribution of the game will occur shortly after launch - no doubt fueled by the success of Fable 2's episodic release.

"Soon after the retail launch we're doing episodic. We break it down in chapters. We give away the first chapter entirely free, the first hour. When you reach a certain point in the game it says 'thank you for playing the pilot of Fable III, do you want to spend an extra 2-5 or whatever dollars to buy the next episode, or buy the whole lot?' Press 'yes' and you will immediately continue playing"

Lionhead also hopes to see about 5 million copies of Fable 3 sold, up from about 3.5 million of Fable 2.  Obviously they'd like to see 50 billion copies sold, but that's not going to happen, but perhaps the simultaneous release of the game on Windows will help.  Fable 3 is also still supposed to have Kinect support in some way - though Lionhead hasn't given any details.  Given Kinect's release date is after Fable 3's October 26th date, we assume it'll be patched in.