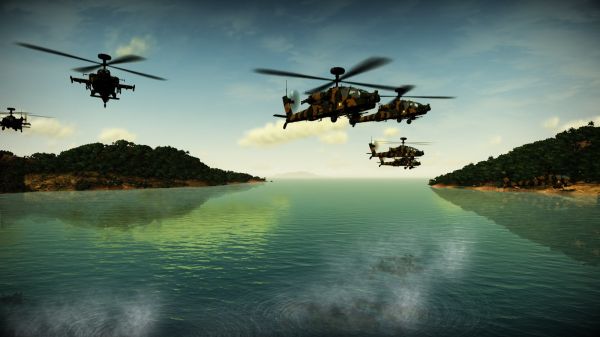 Activision has announced a brand new flight sim for the Xbox 360 and PlayStation 3 called Apache: Air Assault.  The game is being developed by Gaijin Entertainment and features sixteen multi-level stages through the environments of Africa, Middle East, and Central America.  Catering to both the hardcore and casual, the game will offer both arcade and simulation styles of play.

Apache: Air Assault will feature a true to life local co-op mode where players can pilot and co-pilot the Apache helicopter together through the entire campaign.  The game promises a variety of missions with plenty of stuff to blow up all over realistic terrain based on satellite imagery.

Some of my fondest gaming memories are using a similar set up for PC space flight sims of the past like X-Wing, Tie-Fighter and others.  While Apaches don't fire lasers or blow up Death Stars, I think I can pretend.  Apache: Air Assault is out this Fall.