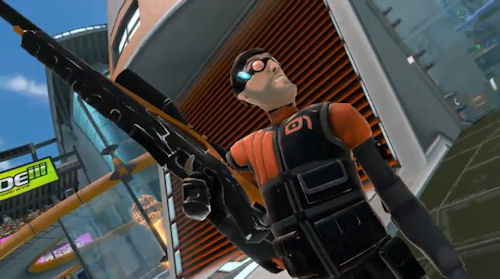 The folks at Uber Entertainment have just revealed a character profile of the Sniper class in Monday Night Combat.  He's a bit...uh... off, to say the least.  That being said you can tell he's a critical part to being successful in the game thanks to his special abilities like traps - which can help guard against those waves of robot enemies.

Along with the character update, we're now given a peak into the game's fictional sponsor system.  Each sponsor in the game provides different attribute bonuses to your character.  My favorite one might be Survivitol - which provides a nice armor bonus.  Right now it's unclear as to how you'll earn new sponsors, but most likely, it'll be tied to experience.