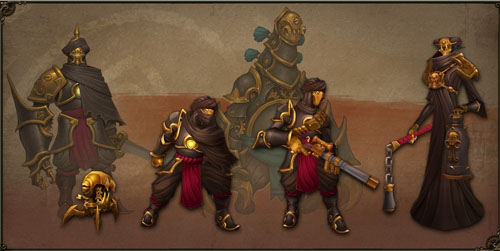 Every other week up until E3, Runic Games is revealing bits and pieces about the Torchlight 2 world. Call me a big nerd, but I love these kinds of sneak peaks into the lore of games while they're being made. The latest installment is about the races of Torchlight 2. The Sturmbeormen, the Ezrohir (pictured above), the Dwarves, and the Varkolyn are all detailed:

In the far north of Vilderan dwell the Beornen: a race of bear-men who have developed a primitive culture built around exploration and trade - and, from time to time, plunder. These raiders, or "Sturmbeornen," cross the northern channel and ravage the coastline settlements, pillaging and slaughtering in their quest for power, glory, and battle.

Most of these raiding parties consist of a few dozen bear-men, but a veritable army of Sturmbeornen has recently arrived in the Estherian Steppes - far outside their usual range. Led by the fearsome warlord, General Grell, the Sturmbeornen push ever nearer the Enclave, the last city of the Estherians, and not even the might of the Vanquisher Corps can stop them.

But the process was flawed. The Ezrohir gained immortality - but the corrupted ore burns out over time, and the Ezrohir die unless they can procure more Ember. Their insatiable need for Ember led to a disastrous war with the Zeraphi, and the Ezrohir were driven out into the Mana Wastes, forced to hide in their ancient fortresses. For centuries they have waited, and plotted ... and their vengeance is finally at hand.

The oldest myths of the creation of the world always mention the dwarves: Short, stout beings who discovered the secret of Ember-powered clockworks, and, with it, conquered all of Vilderan and much of the rest of the world. But their lust for Ember led them to make war on the dragons, and, ultimately, brought them to the brink of destruction. As the dwarves' power waned, the races they had subjugated rose up and decimated them, sacking their glorious cities and plundering their precious Ember-powered machines.

All that is left now of the once-mighty dwarven empire are their dead, grotesquely animated by the corruption of Ember, and their wondrous machines; all still steadfastly defending their deserted mines and ruined cities from invaders who never come.

After dwarven civilization collapsed, their oldest enemies, the Varkolyn, crept from the shadows, claiming the ruined keeps and palaces as their dominion: the Kingdom of the Dark. For centuries afterward, the Varkolyn ruled over the dwarven ruins, making war on their neighbors and preying on anyone who strayed within their territories. Ultimately, they failed to grow their civilization: The First Great Varkolyn Empire was also the last.

For all their pretense of civilization, for all their glorious plans, the Varkolyn lack the expertise to carry them out. Those on the fringes of Varkolyn society have a tendency to backslide into barbarism, splitting into feral clans and even going to war with their more advanced cousins. All that still unites them is their utter contempt for other races.

The last sneak peek was on some of the monsters of Torchlight 2, if you missed it.

Torchlight 2 is due out this coming July on PC.