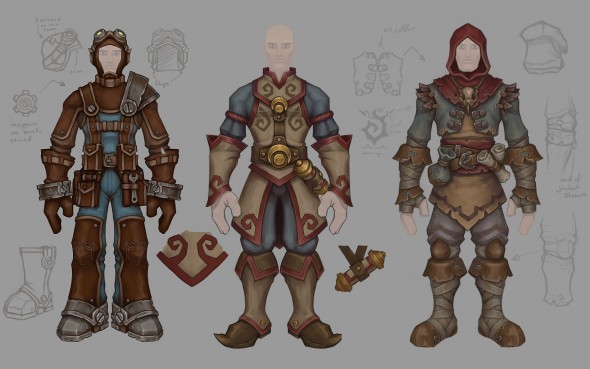 After the fantastic news that Torchlight 2 will feature co-op, we've been jonesing for some details on it. PCGamer sat down with Max Schaefer and Travis Baldree of Runic Games to ask all the right questions about what to expect from Torchlight 2 in terms of class creation, co-op, and character customization. Torchlight was a fantastic release for PC gamers with simple looting, dungeon crawling, RPG action. The one thing it was missing frankly, was co-op capabilities.

With the formula for a great game in place, the original team is working on a full-on sequel (not just a co-op add-on) to the first title, and boy is it looking nice from where we're standing.

According to the guys over at Runic Games, they're working toward an MMO style game, but Torchlight 2 will be a great bridge between the first singleplayer experience and the huge world of an MMO.

Travis Baldree: It’ll be free online play. It’s not a multiplayer extension for Torchlight, it’s a full sequel, with lots of new stuff that wasn’t in the original game, but it’ll have full multiplayer support. You can play through the singleplayer story in multiplayer co-op. We’re playing multiplayer in the office right now. We’re trying to basically look at all the things people wanted out of Torchlight, that we didn’t ship in the initial game, and we’re trying to incorporate as many of those as possible.

Max Schaefer: It’s safe to say that every review said “where’s the co-op multiplayer?” (laughs) It was the obvious thing. Why are we going to launch into the long term MMO right away when we’ve got everyone that’s bought Torchlight wanting co-op multiplayer? It makes sense for us strategically, too, to get a good practice session, if you will, for multiplayer with Torchlight. To make an MMO is a huge endeavour. It takes years, it’s a big risk. This way we can really feel out how multiplayer works with Torchlight, and we can give players who have been complaining there’s no multiplayer in Torchlight what they want, too.

Sounds to me like the fans have spoken. I know Co-optimus had their say in the matter. Now we want to know what you can do in co-op, and what players will see.

Travis Baldree: So we have, for the sequel, randomised outdoor regions with time of day that passes and weather. We do character customisation now, as opposed to the three iconic characters we did in Torchlight. You can choose your gender, and when you’re choosing your class you can choose different faces and hairstyles and features, and so on. All that stuff features in the MMO, but it just seems like a great time to go ahead and do it.

We'll (probably) also see quite a few players in the Torchlight 2 realm. Not just 2, or even three. We're even expecting the difficulty to scale depending on the size of your party. Both great aspects for a co-op game, if we do say so ourselves.

Travis Baldree: We’re trying to keep it as close as humanly possible, honestly. Obviously there’s no pausing, but the aim is for it to feel as fast paced and enjoyable as we can possibly make it. We haven’t decided on a final player count for a session. It might be anywhere from four, to six, to seven. It’s really going to depend on how fast people are at mowing down monsters. We will probably, to a certain degree, limit the number of summons you can have, to prevent it being a crowd of five guys with twelve zombies apiece wandering the screen, for the sake of your sanity.

Travis Baldree: The difficulty of the monsters tunes dynamically to the number of party members who are nearby. And we’re using loot rules that are pretty similar to Mythos where drops are basically your drops. You pick up what you found and you don’t have to fight over loot. In the singleplayer we’ll allow you to pause and you will start exactly where you left off and it’ll retain the full state of the region that you’re in. In multiplayer, because you’re going to be dipping in and out of other people’s games and everyone’s got their own random world, you won’t have that. It might not be your game that you’re joining, so the world’s a little bit less concrete in the multiplayer, just given the nature of play. We want you to be able to go into the lobby and drop in and out of games and just join up with people and play for a little bit, hop back out, go join a different game.

Excellent, especially with the drop-in/drop-out aspect. The team also gave some hints on some co-op specific "powers" that will likely benefit an entire team when you have someone casting protective or enhancing auras. There are quite a few benefits to sticking together, aside from the increased difficulty when more people are in the game, we're hoping these auras will keep the crew boosted together.

It sounds like they've still got quite a bit of work to do on the classes, finalizing details on the co-op, and putting it all together for a Spring 2011 release. But, given what we've already seen, we have very high hopes for Torchlight 2 in the co-op community.

You know what, you might even get me to try this whole PC gaming thing again, it sounds that good.