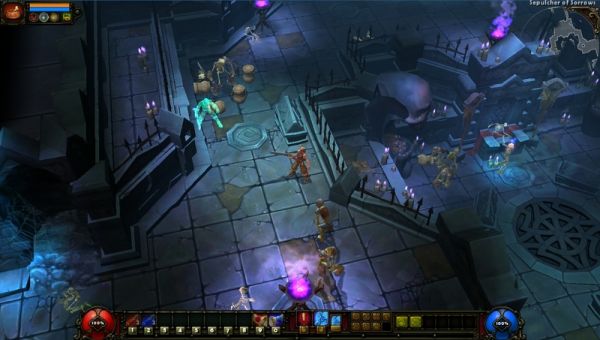 Torchlight 2 was supposed to see the light of day last year, but we were told to just go play some other awesome games while Runic continues to make Torchlight 2 awesome.  So here we are a month away from the biggest PC release in years, that would be Diablo 3, and there's still no official word on Torchlight 2's status.

What we do have is a quote from Runic head honcho Max Schaefer that sheds some light on the game's release goals.

Well, I'm sure you've noticed Diablo has announced a date. So, we don't want to fall right on that. The real answer is when [Torchlight 2] is finished, is Diablo 3 right now? Then we'll wait."

Schaefer said the launch date will "ideally" be shortly after the one occupied by Diablo -- and optimistically it'll be a month later. He noted that Runic isn't going to rush to beat Blizzard, however. With the two products selling alongside one another, he feels it's best to polish the game as much as possible. He doesn't want to be the "cheap" alternative, simply the less expensive one at a $20 price. He also noted the game would have an offline mode, modding, LAN support, and that its pacing would separate it from the competition.

If you compare Diablo 3 and Torchlight 2, head to head (and it's hard not to), the Runic folks are still doing alright.  We've been waiting on Diablo 3 for the better part of 10 years while Torchlight 2 has only been in development two.  Both games are going to be massively awesome cooperative experiences and frankly, and while...yes - it probably would have been in Runic's best interest to get the game out the door before D3 - we're glad they are taking the time to get things right.

Torchlight 2 will launch on the PC with 8 player co-op play and cost $20.