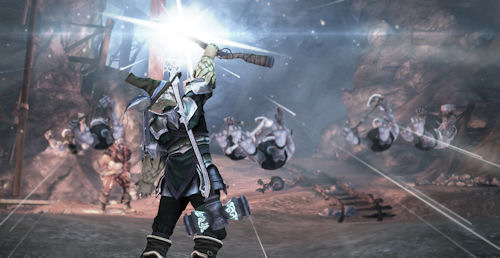 Fable III is looking to follow the trend of the Fable universe and expand the mechanics of the game. We’re looking at a huge overhaul this time with weapon morphing, spellcasting changes, and even some co-op trading opportunities to enhance a weapon. CVG interviewed Senior Design Director Josh Atkins about the changes to be expected, and like everything we ever hear about a Fable game, it sounds pretty epic so far.

Much like every other section of the game, the spell casting system has had a complete overhaul," he said. "From the moment the player receives their first spell, they are able to cast the maximum spell level, albeit very very slowly.

As the hero levels up their spell ability, they will find that progressive spell levels will cast much more quickly, meaning that at maximum spell ability level, the highest level of the spell will almost insta-cast. This means magic for all levels is much less about standing about waiting to charge up to useful levels and is more immediate and fun.

With the spellcasting you’re also given an amulet to use for each spell. If you decide to mix-and-match amulets, say fire and ice casting, you’ll cast something new all together. Mixing up different spells for different effects can be devastating on enemies, though I wouldn’t put it past Lionhead studios to have a little fun with the casting - goofy names, or silly dud-combos come to mind.

For those that like to take a more blades-on (or, bullets-on presumably) approach, the new weapon mechanic includes the ability to morph your weapons based on how you use them. Josh Atkins does warn us that some of the weapons have to be taken down a specific path to get any morphing, but most will change to fit your play style.

When you are playing co-op these morphing weapons take on a new meaning as some weapons can only upgrade if you are willing to do a nice thing and gift them to another player.

Trading up weapons to get a new effect? That sounds co-op to me. Maybe they got the co-op thing down pat for Fable III, as it’s certainly pointing in that direction. Third time’s the charm and all that?