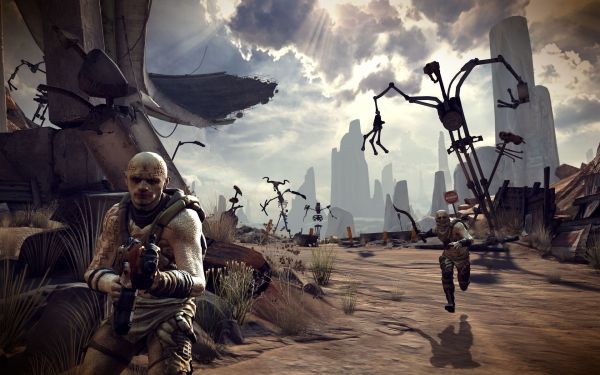 id's Quakecon is going on right now and out of the conference comes some pretty interesting RAGE news.  First up is a version of the game is currently being planned for iPhone and iPads, a live tech demonstration showcasing id Tech 5 running on the iOS4 platform was given by John Carmack and the results are impressive.  Full lighting and shadows, detailed megatextures and 60 FPS were just some of the features on display.

Speaking of id Tech 5, their latest 3D engine, according to Gamasutra for the first time id will not be licensing their technology to 3rd parties, instead keeping it in house.  id Tech 3 was an incredibly popular engine used by such 3rd party titles as Call of Duty, Alice, and Jedi Knight 2.  So what's the reason behind the closed model?  id and owner Zenimax Media feel the engine gives them a competitive advantage in the marketplace, only Zenimax published titles will be able to utilize this technology.  Could we be seeing a new Elder Scrolls title utilizing id Tech 5?  We can only hope.

We've got some media below including some new screenshots of RAGE and a video of it running on an iPhone.  Still no co-op details to be had sadly, but with an expected release of next year for RAGE - we're bound to get that info soon.