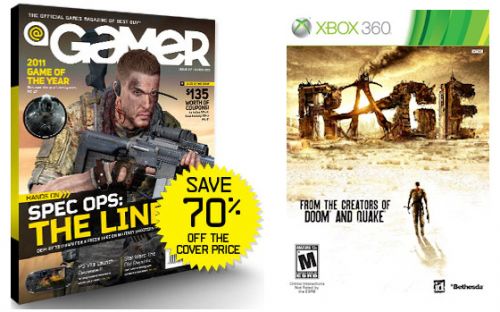 The Xbox 360 and Playstation 3 versions of id's post-apocalyptic shooter RAGE and Epic's @#$% third-person shooter Bulletstorm are on sale at Best Buy for $19.99 this week - a fair deal, to be sure. But the March issue of Best Buy's @Gamer Magazine (pictured) also happens to have $15 off coupon for both games inside. That means you can grab each shooter for just five bucks a piece - if they're still in-stock!

Other coupon deals from the March issue:

Note that the price on RAGE, Batman: AC, Mass Effect 2, and Bulletstorm is so low because each title is on sale this week. Your store will need to have the title in-stock, but Best Buy has removed new copies of these titles from their online database so you have to check in-person. You also need to present the appropriate coupon from the March @Gamer issue (with Spec Ops: The Line on the cover). This could involve buying the magazine itself, though I've always done well just opening the store's copy of the magazine to the coupon page and presenting that. Good luck, bargain hunters!

RAGE is a post-apocalyptic 1st-persons hooter from the creators of DOOM and Quake. Its co-op campaign supports 2 players in split-screen or online. See our full co-op review for more details. Bulletstorm's non-campaign Anarchy mode supports 4 player online co-op. Check out the co-op review for our impressions.