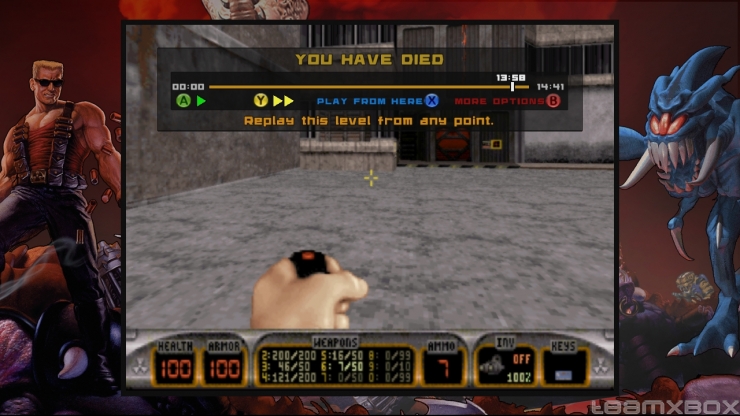 TeamXbox has posted their hands on preview with the XBLA version of Duke Nukem 3D, coming next month.  The most important information from the preview is the confirmation of 8 player co-op.  Yes, eight buff dudes with guns spouting awesome one-liners can play at the same time!  The wonders of modern technology!  However, there's much more than just that to keep your interest.  The Tivo-like replay system is particularly innovative, allowing players to rewind from a death and play back from any point on a level.  These replays can be saved and shared online, too.  I foresee lots of poring over the leaderboards for awsome playthroughs in my future.  Of course, the game also features the requisite huge guns, wacky enemies, and strippers.  Achievements for the game are listed, as well, and you can check them out here at Co-Optimus after the break.

Piece of Cake—Complete “L.A. Meltdown” on any difficulty or in co-op. (25 points)

Let’s Rock—Complete “Lunar Apocalypse” on any difficulty or in co-op. (25 points)

Come Get Some—Complete “Shrapnel City” on any difficulty or co-op. (25 points)

Game Over—Complete “The Birth” on any difficulty or in co-op. (25 points)

Duke’s Mighty Foot—Step on 40 enemies after using the Shrinker on them. (10 points)

Looks Like Cleanup on Aisle 4—Step in a pile of excrement. (10 points)

Alien Maggots are Gonna Pay—Finish the “Hollywood Holocaust” level in under 3 minutes. (10 points)

Hail to the King, Baby—Earn respect and get 500 total kills in ranked DukeMatch games (Online). (25 points)