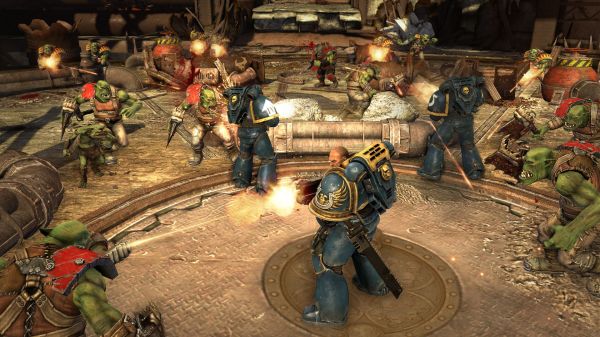 No, we still don't have definite confirmation Warhammer 40k: Space Marine will offer co-op play - despite what you see in the screenshot above.  We've seen numerous hints since the game was first announced last year, but nobody is willing to confirm.  The latest screenshost from Gamescom make us yearn for this information, the Emperor needs it now!

If you want to show your loyalty to the Warhammer Universe, specifically Space Marine, THQ has launched a new program called The Honor Guard where fans can earn information and swag for their favorite muscle men in space franchise.  If you attended Gamescom 2010 you had a chance to get Warhammer 40K patches and unique ringtones by signing up.  More info is available from the Space Marine website.