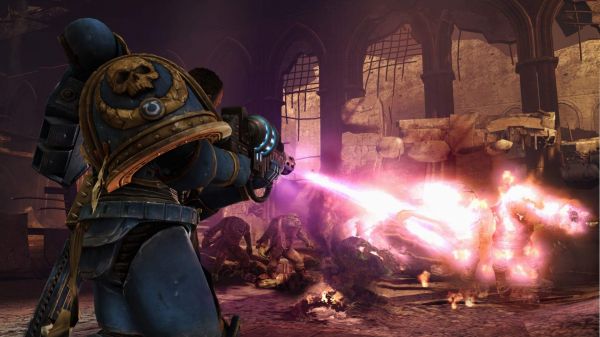 I guess five weeks is enough time to decide if a video game deserves a sequel.  Space Marine came out 38 days ago, and plans for a sequel already appear to be dead in the water.  In a recent interview with Joysitq, THQ's Executive Vice President of Core Games, Danny Bilson, flatly said: "I'm not sure there's room for Space Marine."

While this is not a definitive statement outright killing the 40k spin-off franchise, it's never a good sign when an Executive VP is "not sure if there's room" for a game.  Bilson was referring to the upcoming WH40k MMO, Dark Millennium, stating that the Imperium of Man (which includes Space Marines) will be a playable race.  Since Dark Millennium is intended to be more action-based than traditional MMO's, Space Marine would basically be cramping its style.  This is a major bummer, since the entire tone of Space Marine was building toward something much grander, and the endgame left players  primed for a sequel.

Space Marine will still be supported through DLC.  The FREE four player online co-op mode, Exterminatus, will be out by the end of the month.  Other DLC is expected to follow.